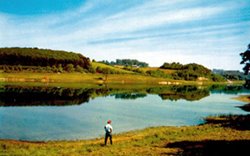 Oneida Dam
A beauty spot near town, and our local fishing haunt.

Email ThisBlogThis!Share to TwitterShare to FacebookShare to Pinterest
Labels: Around Butler

My buddy, in those early days, Vin Cooper and I rode our bikes from the west side of Butler out to Onieds Dam to fish for blue gills and sun fish. Those were the carefree days of youth. Vin left us about 10 years ago.

that picture is kinda old as the trees around the dam were always cut...now u can hardly get near the water..also your not allowed...used to fish there all the time for really nice bass,and i bet there are some really big lunkers in there now... al.......

They should open it back up again. Why did they close it in the first place?

THEY CLOSED IT ON ACCOUNT THEY ARE AFRAID THAT TERRORIST MAY POISION OR BLOW IT UP.THEY HAVE A SO CALLED GAURD BY MOSTLY HE IS ASLEEP IN HIS VEHICLE

My dad took me fishing here many evenings back in the 1940's. So glad I can't see it all overgrown as you describe. I'd rather keep my memories and Charles' old photo.

My dad used to take me there fishing in the late '80s and even up to early '90s. I, in turn, brought my friends there during the summer of '93 a lot when we were all still (barely) teenagers, and taught them to fish. That was the last summer I really fished there.

Later, I would drive up to Clarion University to visit some friends now and then, and I'd drive right past there all the time.

I live in California now, but will be back in Butler next month, and definitely want to take a drive to see the damn. Thanks for the reminder, Charles.

My uncle, Rene Maltagliati, used to take me there to fish when I was ~6 years old. I always called it the United Dam. My uncle just passed away this week at 92. that was probably the last time I ever went fishing - good memories.

I live approximately 3 miles from the Oneida Dam. It is still calm and serene. There are many, many water lilies at the upper end of the dam. When the water gets low, you can still see trunks & roots from the trees that used to stand there. In the fall, it is one of the most gorgeous spots to take pictures with all the pine trees intermingled with all the beautiful golds, yellows, and reds of the season.

Tremendous memories of the dam. As kids in the summer we rode our bikes from the "Hill" to fish and just goof off. Drove every gravel rode around it as a teenager looking for the best parkin spots.
The old dam as aged well for alot of us.
BMc

One fall day in the 50's my mom and dad took us on a picnic to the dam---you see my mom was perturbed with dad that we hadn't had one picnic that summer and she was bound and determined to have one---so they packed us (Kandy, Bertie-and her friend Connie, and me)into the old Midnight Green Hudson and off we went---it had turned nippy, but it didn't matter--we were having a picnic. We sat on the grassy bank eating our bowls of chili with our mittons on---it was strange at the time but makes a wonderful memory of my Mom and Dad.

I remember the dam as a real small child. Dad would take us out there to fish. All
we ever caught were little sunfish. However, I do remember seeing a guy pull out a huge bass down under the bridge. When we used to go to Emlenton, we would always pass by the dam and comment on whether it was high or low. I remember how I thought it was a bad word since it sounded just like a bad word which we were not allowed to say. The same bad word which caused such a scandal in Gone With the Wind. I remember the audience gasping when Clark Gable said: Frankly, my dear, I don't give a damn. That was about 1939. We've come a long way, baby. Right?

Wasn't there another small dam to the south of Oneida? If I remember correctly it was called Thorn Run Dam.

We would ride our bikes out to Thorn
Run Dam, then on to Oneida, back to Butler before our parents even new we were gone! I remember fishing there when it was the year for the locusts. They were everywhere and we used them for bait!

I grew up on the banks of the Boydstown and Onieda valley dam. What a terrific boyhood, fishing, swimming and endless explorations. I'm saddened that the water company has restricted the use of the waters. I allways enjoyed them

Oh, my goodness. . .does this bring back memories. . .I lost a contact in the grassy area at the top of the dam. . .as for the other memories. . .wonderful, romantic, sweet. . .hmmmmm

So the powers that be have closed off the dam to the public (who pay for it). I can just see Osama bin Ladin sitting in his cave directing his minions to attack the Oneida Dam in Butler. Get real!!!!

We were driving north of Oneida Dam on Thurs. and saw 2 beautiful bald eagles just sitting in a tree watching the traffic on Rt. 38. We took a picture if I knew how to add it to this I would. Just found this blog in searching for answers to what is under the Dam? One time a few years ago when it was real low we saw rock parts where a bridge once was. I lived in East Butler as a kid ,now live North of Bruin.

I grew up there as we had the Orange Brick House on the Rt 38 side of the Dam with the creek in the front yard. I would walk "under" RT 38 to fish and sell my worms to the many that used to Fish in the past park like setting that was well maintained by Mr. Anothny who would park his John Deere "B" under our Apple Tree while Mowing. If you look in the very top center part of this picture, there are building, This was my Grandparents Farm that I now call my Home. Great Memories of Both the Dams. The upper Dam is now drained and they are rebuilding the Oneida Dams Breast Works to meets todays Storm Standards.

I think very child in butler got there start at fishing at the Dam. then when they grew up and had a family they did what there parents did take them to the Dam. Now that I have a family I will be taken her their to fish just as I did.