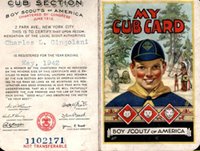 Scouting was/is important. We started young.
Posted by Charles at 4:50:00 AM

How many Eagle Scouts does Butler have?

Scouting was one of the most rewarding experiences of my youth and I am grateful for it. We had great leaders.

It was a great experience. I learned to love and respect nature in those young years, and the chance to be with like-minded boys and caring leaders opened up a new world for me.

In the mid 1920's the government supplied thousands of pine seedlings which the Boy Scout's planted in various places in Butler County. Some of the groves still exist around Onieda Dam area.

In 1938 or 1939, I remember being a very new Scout helping direct traffic at the intersection of McKean and Wayne for the Macy's Inflatable Figures Parade that came to Butler.

It help me in The US Army.

A story about 18-year old Eagle Scout James Calderwood of Chevy Chase, Md., has earned all 122 Boy Scout merit badges.
Click: He earned every one of the 122 merit badges

What troop fixed up the Wilson cemetery near Kepples Corner in 2005?

Butler also had a Sea Scout troop in the 1950's. It was mentored by Trooper Lofblad of the State Police.
Meetings were held in the triangle shaped building at the corner of E. Jefferson and Kittanning Street.
The top floor of the building was configured like a ship. We always asked for permission to come aboard.Great times.

HOW COMES THROUGH "22", GREATEST TIME OF MY LIFE.

I was a member of that sea scout troup and attended many meetings. I also remember Trooper Lofblad I had forgoten his name till you mentioned it. In the late 50's say 59. We went on several outings. Once down the allegheny river in canuoes took 5 days from franklin to kittaning . I was worried cause we had the food in our large canuoe. Once we went from kittaning to pittsburgh on the P/T boat from the troop from kittaning. Made lot of friends and had great times. Those were the days.