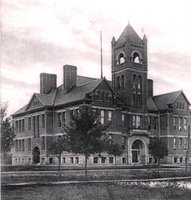 How many of us passed through these arches?
Posted by Charles at 5:11:00 AM

Email ThisBlogThis!Share to TwitterShare to FacebookShare to Pinterest
Labels: Schools

I have , Charles, passed through similar brick arches. At my 50th high school class reunion last year, one of the favors was a picture of the lovely old high school where we graduated . On the back of this picture is sticky material in order that we can use it to hold things on our refrigerator, etc.

I started first grade at Broad Street School in 1927 and, some time during my stay there, I was bitten by the flying bug. One day, at recess, a blue and yellow Army Air Corps bi-plane buzzed the school yard and thrilled all of us. Later in life, I was able to fly a plane almost like that one as well as many others.

My father was the first school psychologist to be employed by Butler School District in 1956. His office was behind the two little windows just above the main entrance arch.

I started school at Broad Street in 1933. I remember they rang a bell which could be heard all over the neighborhood. I lived close to the school on Jefferson Street. I remember the names of my teachers, Miss Grossman, Miss Smoyer, Miss Williams. We never cut up at school and going to class from one room to another was very orderly. Later on, at West End, I remember how we marched to the rhythm of Miss Jackman's snapping fingers. We did not get away with anything. Do I sound too nostalgic for those "good old days" when grownups ruled the roost?

I started school at Broad Street like many others. Jack Clark became a life long friend from there. John Shakely and I goit paddled for fighting on the playground and he also was a long time friend. I remember Miss Buback and a Miss Kramer as teachers-wow that caused a real memory burn!!I think Kramer had a room #8 where they put in new lights and it was better lit than any of the other class rooms. I seem to recall a Miss Graham who I didn't like and I got her and told my parents I wasn't going back to school that fall. But I did. The play ground was all brick. That all would have started 73 years ago. We lived at 312 W. North Street only 3 blocks from school and Thompson's Ice Cream Factory was only a block away. My Dad had to move back home when the depression put him out of work so we occupied one side of my Grandfather's double house. As quick as Dad could afford it we moved to Third Avenue and I went to West End School.
John M.McCall

I attended kindergarten and first grade at the old school. It was torn down at the end of my first grade. My teacher was Mrs. Weimer (don't remember the room # but can picture the halls and classroom like i am still standing in them. WOW what a memory

What a beautiful building. Why does Butler tear down the grand to replace it with inferiority.

I attended Broad Street for 1st("48) and 2nd ("49)grade. My teachers were Miss Williams in 1st and Mrs. Neuman in 2nd. I was in love with Miss Williams. Walked to Broad Street every day,just like the US Postal Service, rain or shine, snow or sleet from Pearl Street.