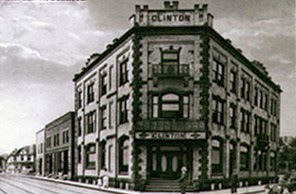 One of our former imposing buildings, a favorite hotel. Now sadly missed.
Posted by Charles at 4:15:00 AM

How I remember this hotel. It was only a couple of blocks from Klugh's market which was in the flatiron building. My grandmother lived there and we spent many a happy hour there. I was little at the time and the hotel was rather imposing. I remember going in a couple of times but it was a bit dark inside and I was a bit leary of that. It stood on the corner of Pillow and Cunningham St. if I remember correctly. I can just see it clearly in my long term memory. My short term one is a disaster and I don't remember what I did yesterday.
Sullivan's Run was next the the building where Grandma lived. We called it the "crick".

Aldolph's Drug Store was across the street. I see where his wife Laura Yates passed away recently. She was 100 years old.

I can see the front porch of the house where I was born. I remember it as a house, but it was actually an appartment. The front porch was on Pillow St and the back door was on Second Ave. Everyone in the neighborhood acted like they were loving, caring relatives.
I was lucky and blessed to have that background and to this day believe I'm reaping the benefit of being born there.
Thanks be to God.
Garris Graham

Hi Garris, Dick Gamble here, BHS58.
Just read your comments. I also lived nearby on 4th and 5th aves. Elswhere in Charle's blogs there is a photo of our 1st grade School, Broad St. I have a 1946 class photo of you, me and others at Broad St. Email me RAGamble@san.rr.com if you want a copy.
Hope you are well. I am.

Always thought that when I grew up I would like to go into the Clinton bar and have a beer like my relatives did. It was called the "Elbow Room" if I remember correctly. Never did get that beer.
Dick Gamble, San Diego

I may be mistaken but I think the
owner's at least when I was a young
boy was the Fratto family, that would have been around 1957 or so

Regarding the comment about Laura Yates. I remember her quite well from when I worked at Adolph's in 43-44. I went to school with Dorothy DeFoggi, her sister.
I also remember young Adie and Jimmy, their children. I have learned that Adie has now passed on. I sent my condolences to the family when Laura died at the age of 100. How wonderful that she lived that long.

My Uncle and Aunt owned the Clinton Hotel Joe and Venida Scialabba. I think it was around 1951 when he bought it, and had it til about 1959...I'm guessing that date. It was so beautiful inside and appeared hugh to me as a small child. I could never believe that small lot held that huge hotel.Yes we were related to Mary Fratto (Nicks wife) .

Living on 3rd Avenue I was close to the old Clinton Hotel but spent little time doing more than go by. I was way too young to be in there, You may remember Travaglio's Repair shop next to the Hotel. Guy, Mike and Vince were the boys, Guy got a degree in law and spent sometime working for WISR, Mike followed his Dad in running the repair business and Vince spent sometime in jail.
We spent a lot of time playing in the field across Pillow Street. And along the Connoquenessing Creek.
John M. McCall

I lived on 2nd Ave and then on Pillow St. I had a friend named Nancy Schillaba whos parents owned the hotel. This was a triangle shaped block and many apartments in this block. We were like family, we live so close together. Guy Travaglio is my uncle and he still lives at 118 Pillow St. I think his parents bought most of the property on that block. Older Guy and Chris ran a Magtag repair shop. We played in the street on 2nd Ave because not too many people had cars. Yeah, the Clinton Hotel at that time held some kind of mystery to a kid. Great memories. If you remember E-mail me at nanakaren28@hotmail.com
Karen Rupert (Russo)

A number of years before the Scialabba's owned it, my Uncle Jake Schaffner owned the hotel, and subsequently my Uncle Eugene Schaffner Sr owned it. I don't know the years involved, but I'm guessing in the 30's and 40's.