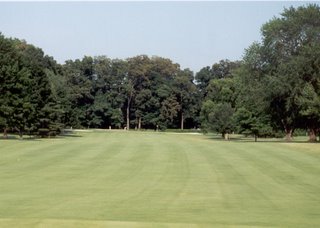 Butler Country Club ~ First Fairway
Does the Butler area have the most golf courses? ~ 16

Email ThisBlogThis!Share to TwitterShare to FacebookShare to Pinterest
Labels: Around Butler, Golf, Sports

Hi all,
Remember the Butler country cc. Was a caddy there for years when I was a boy. We got $2.00 for carrying a golf bag for 18 holes. A good tip at the time was 50 cents. Did you forget the armco country club? Left Butler when I was 17, joined the Navy and never came back, do miss it at times. jack cicco

I was wondering how much I made when I caddied there. It was $2.00 was for singles and when you were big enough to carry doubles it was $4.00. One time I made the $4.00 plus tip. Then I lent the $4.00 I made there to a real good friend to play cards at Al Macalls - with conditions that he pay back the $4.00 no matter what and give me half of his winnings. Guess who that guy was.

I started caddying at BCC when I was 11 years old, 57 years ago. That was my first job and I'm still working. Steve Potochny was the caddymaster and Radar Jewett was the pro, Paul Biggy the assistant pro. We got $1.40 for 18 hole singles, $2.80 for doubles. Later the rate was raised to $3.50 for doubles. Guys from Lyndora would hitch-hike out route 8 from the Picklegate Crossing to the top of the hill near #4, then walk across the course to the caddyshack. Frank Komitsky, Jr

I played there every day in the summers from 7 am until 7 pm, before I went off to work as a busboy at the Saxonburg Hotel. What a course to learn the game on.

I remember when Armco Golf Course used to be owned by a family by the name of Treadway and was only on one side of the road. Is it still Armco or should I say the company that bought Armco or has it been sold?

I worked there as a caddy when I was about 12 or 13. I went there with my friends Bob Logan and Bob Somerville. I did not know how to swim and once the other caddies threatened to throw me in the lake because I answered the call for someone else who was not there at that moment. I quit soon after. My father just thought I was lazy but I never told him about the threat. We used to sit by the hour playing mumbly-peg on the wooden benches. The pay was ridiculous by today's standards but then how can we compare?

Seems like a lot of us caddied here. I lived in Meridian and rode my bike down through Renfrew to caddy , ate a moon pie for energy and biked back home. Some days I got 36 and somedays I got doubles. One of the first guys I caddied for was Carl Hoffman who owned Hoffman Auto Parts. He didn't tip. End of the summer he asked me to come into the store and talk to him. I eventually went to work for him thinking that I might not get the chance to go to college and might need a trade. I worked with Dick Adams and Jim Frances at the counter and they taught me the business. Fortunately I did get a scholarship from Armco and went to Univ. of Cincinnati for my engineering degree.
A few years ago while in Butler for a class reunion Mitch Ufner, Deem Schoenfeld, Bob Bartley and I played the CC. First time I had ever played it-60 years after I worked there. I just learned Bartley died a couple weeks ago in Chicago.
John M. McCall

Claiming most of these links for "our small town" is both disingenous and lying. Butler County? Ok. Butler? Are ANY of them in Butler?

Let the courses lie where they've been planted. This is pure Butler BS.