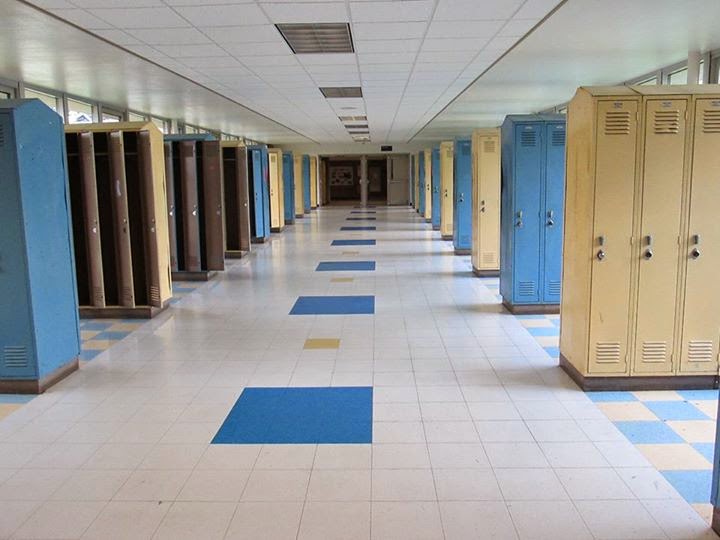 Email ThisBlogThis!Share to TwitterShare to FacebookShare to Pinterest
Labels: BHS

I remember mine being in the wall. Were these also around in the late '60s?

These lockers are in one of the main hallways between the different wings of the school. I was never lucky enough to have a convenient locker. My lockers were always in out of the way places that I never walked past during the day. I always had to carry all of my books.

I still have dreams about forgetting my combination

I always hung out by my locker checking out the ladies and looking super cool in my parachute pants. Sometimes I would just wink at the girls. They would always smile and wink back. I was so cool.

Denny Rickard used to be able to fit into one of these.. he scared me as I heard the noise coming from inside... couldn't believe he could do it!!

I believe these lockers are the same ones in the hallway that drops down to a center point with an exit door that goes toward the (circa 80's) science wing.

Until they bolted those things down well, people would push them over on the last day of school and they would fall one by one, down the ramp like dominoes! :-)

In the 1960's it was common to wear cleats on the heals of your shoes. I guess it was to save the heals from wearing out. But the clicking noise they made as you walked down these halls really sounded cool. Or at least I thought it did.

John, interesting fact! That trend continued into the 80's at BHS, though they were associated with those from the rougher crowd. It was common for them to wear "engineer boots" with those cleats you reference. I too remember that sound, like it was just yesterday, at your mentioning them.

I recall when the new high school first opened at the top of the hill, think it was about the same time as the first McDonalds which was nearby. Never got a chance to go to the school as we moved the summer after I got out of the 6th grade. But got inside a few times as my neighbor who was a year older was on the swim team and they had meets there, if my memory is correct. Believe the year the school opened there was a very bad accident on the hill involving a car that was new at the time called the GTO.