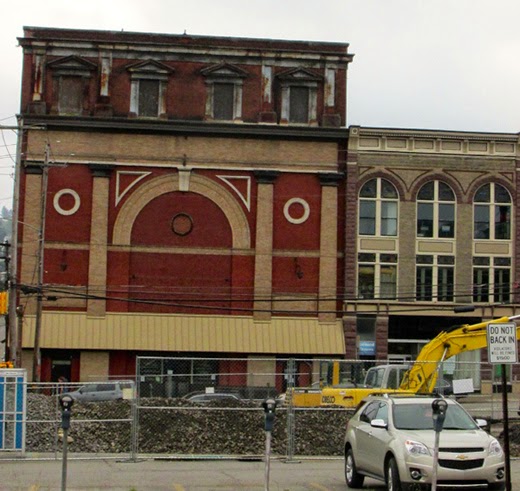 Not very majestic now.
Photo: Barbara Bloom
Posted by Charles at 6:30:00 AM

I was always familiar with this building because it was just around the corner from the old YMCA, where I hung out as a kid. I grew up in Butler in 60's and 70's but even by then the Majestic Theater had been remodeled into something else.I'd love to see pictures from when it was in fact a theater. Thanks.

When my mother and aunt were young girls they would walk to this theater. Cost them 10 cents each to see the movie. After watching a scary movie they would run all the way home. That didn't happen very often. Almost all the movies they saw had happy endings. Positive movies - - positive thoughts - - positive lives. Good old days.

For the first person who posted their thoughts: Click on the word "Theaters" under the picture and you can see a picture of the Majestic in its heyday plus a few of the other theaters in town.

Dr. Nalathambi owns this wonderful building and even though he is a multi millionaire he has allowed the top of this building to look like an eyesore. It would be nice if he showed some pride in a building that he owns.

Thanks to anonymous for letting me know to click on the theater
tab. I loved looking at the old pictures of the theaters. I remember standing in line to go see the Beatles in a Hard Days Night in 1964(a lifetime ago)at the Butler Theater-what a wonderful theater it was. I didn't write the original question, but appreciate your response.

When I was a kid (pre-teen) I could go here on Saturdays and for 10 cents, watch 5 cartoons, a serial and two Westerns. I can remember sitting in the balcony and you could see bats flying around in the theater. My Dad told me that the second balcony (closed when I was there) was known in his day as "peanut heaven."

You should see the upper floors above the doctor's office. It has been a long time since I've been up there but I bet it hasn't changed. The stage is still there with the catwalks intact. Above that is the dance hall. It looked like a forgotten world up there.