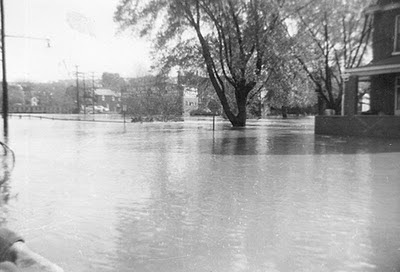 Photo: Barbara Bloom
Looking east on Cunningham St. toward Chestnut St. with the Walsh Equipment Building in the background.
For more pictures click here.
Posted by Charles at 4:30:00 PM

I guess I am too young to know that things like this happened in Butler. Awful.

I remember this flood well. The water came up to the front steps of our apartment on S. Chestnut St.

I also recall that Klugh's market on W. Cunningham St was flooded. The Klughs had to gut the building to the bare walls and replace everything.

After the flood they kept a close eye on the level of the canal that ran beside the store.

Love that nostalgia for the good old days.

The flooding in 1954 occurred before the underground storm sewer system was placed in the "crick" bed. Once the system was in place, the creek was filled in. We had a basement full of water and the water level was 2 feet deep in the first floor of our house. My parents took as much furniture as possible to the second floor of our house. I was young then, but it seemed like we had a flood just about every year.

My family lived at the bottom of cunningham but moved before the flood.I used to play around the creek at the back of our house and almost drownin that creek.

I have a vague memory of watching a flood at the foot of Hansen Avenue next to the Lyndora Hotel. I imagine this was it! Long time ago as I would have been 3 at the time.

The West end used to flood everytime there was continued heavy
rain. Don't know if it still does.

I lived on Fourth Avenue and remember the street flooded with boats going up and down. My father used some kind of pump to keep the water out of our basement so the furnace could run. He and other neighbor men went up and down the street to help neighbors keep their heat on too.

A dear friend of mine who lived on Pillow Street, had her recently purchased piano ruined by this flood. The water came almost up to the keyboard.

Yes it still floods, not like this of course.

This picture looks to have been taken from exactly I live now almost 60 years later. I'm not from here so I've always wondered how it look back then.