The first Jeep was designed at the American Bantam Car Company in Butler by Karl Probst. All in all, the company manufactured 2,675 of its version of the car. But the demand was so great and the Butler plant so small that the War Department authorized other larger companies in Detroit to produce their nearly identical version of the Jeep to fill the urgent military need. The Butler company went out of business in 1956.

Poem about our Jeep 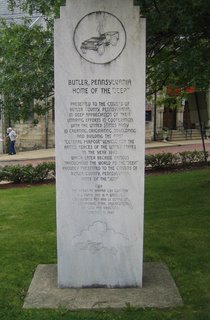 While the Jeep was made famous by Willys, it was actually desiged by our small company called American Bantam Car Company here in Butler. Bantam built compact cars in the 30's well before the term was invented, and incidentally before anyone wanted small cars. Bantam first built tiny Austins under license from a British company and then developed the equally tiny Bantam to avoid license fees. In developing the Jeep (originally known as the BRC, or Bantam Reconnaisance Car) Bantam adopted many of the features of the Bantam. Any mature person who has tried to sit behind the steering wheel of a World War II era Jeep knows that one of these characteristics is small size.

My Dad worked at the Bantam Car Co. thru out the war. I still have his Machinist tool box & tools. I also Have some of the red patches tha he had sewn on his work shirts.

I have one. It makes me proud to have such a rare vehicle and something that connects me to my hometown. Lewis (Sonny) Warren

I learned to drive on a war surplus Jeep on an Iowa dairy farm back in the mid-1940s. After I married and moved to Butler in 1956, I learned that the Jeep had been manufactured in my "new' home town.

It's too bad that Butler doesn't capitalize more on its "claim to fame." There is the museum downtown and some Jeep and Bantam rallies, but more could be done.
I know - it takes money.