Karl Probst ~ Designer of the Jeep 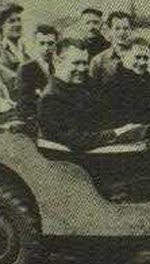 Karl Probst [center] was rightly called the "Father of the Jeep" and thanks to him Butler was duly given the celebrated nickname "Home of the Jeep". Probst designed the vehicle in just 18 hours in 1940, and it took our Bantam company 49 days to make the original, which was cloned for use by the U.S. Army

Every Butler kid should hear about him in school. I never have heard his name.

I was just curious...where did the name "Jeep" originate from? Why was the vehicle called that specific name?

With the help of Wikipedia, I just answered my own question:

There are many explanations of the origin of the word "jeep," all of which have proven difficult to verify. Probably the most popular notion holds that the vehicle bore the designation "GP" (for "Government Purposes" or "General Purpose"), which was phonetically slurred into the word jeep. However, R. Lee Ermey, on his television series Mail Call, disputes this, saying that the vehicle was designed for specific duties, was never referred to as "General Purpose," and that the name may have been derived from Ford's nomenclature referring to the vehicle as GP (G for government use, and P to designate its 80-inch (2,000 mm) wheelbase). "GP" does appear in connection with the vehicle in the TM 9-803 manual, which describes the vehicle as a machine, and the vehicle is designated a "GP" in TM 9-2800, Standard Motor Vehicles, September 1, 1949, but whether the average jeep-driving GI would have been familiar with either of these manuals is open to debate.
Many, including Ermey, suggest that soldiers at the time were so impressed with the new vehicles that they informally named it after Eugene the Jeep, a character in the Popeye cartoons that "could go anywhere."[1]
Words of the Fighting Forces by Clinton A. Sanders, a dictionary of military slang, published in 1942, in the library at The Pentagon gives this definition:
Jeep: A four-wheel drive vehicle of one-half- to one-and-one-half-ton capacity for reconnaissance or other army duty. A term applied to the bantam-cars, and occasionally to other motor vehicles (U.S.A.) in the Air Corps, the Link Trainer; in the armored forces, the ½-ton command vehicle. Also referred to as "any small plane, helicopter, or gadget."
This definition is supported by the use of the term "jeep carrier" to refer to the Navy's small escort carriers.
Early in 1941, Willys-Overland demonstrated the vehicle's off-road capability by having it drive up the steps of the United States Capitol, driven by Willy's test driver Irving "Red" Haussman, who had recently heard soldiers at Fort Holabird calling it a "jeep." When asked by syndicated columnist Katherine Hillyer for the Washington Daily News (or by a bystander, according to another account) what it was called, Irving answered, "It's a jeep."
Katherine Hillyer's article was published nationally on February 20, 1941, and included a picture of the vehicle with the caption:
LAWMAKERS TAKE A RIDE- With Senator Meade, of New York, at the wheel, and Representative Thomas, of New Jersey, sitting beside him, one of the Army's new scout cars, known as "jeeps" or "quads", climbs up the Capitol steps in a demonstration yesterday. Soldiers in the rear seat for gunners were unperturbed.
This exposure caused all other jeep references to fade, leaving the 4x4 truck with the name.
Willys-Overland Inc. was later awarded the sole privilege of owning the name "Jeep" as registered trademark.
The term was also in military slang use to mean something untried, or untested.

I spent 21 years in the US Air Force and can attest that the word Jeep indeed stood for the new,inexperienced trooper,the new guy on the block.

It's too bad Butler can't capitalize on it's biggest claim to fame.

That is not Karl Probst in the center of the photo. Karl Probst is standing on the end of this photo--not shown here. Harold Crist is the driver. This photo was taken the day before the Jeep was delievered to Camp Holibrad (Baltimore, Md).

is there anyone out there who knew karl probst? i'm curious how he felt after meeting the rigorous design requirements of the u.s. army only to have the contract for the vehicle (which he designed) awarded to ford and willys. i know this was necessary as the bantam car company never would have been able to meet production. but a part of me will always feel sorry for him and his company as they were relegated to building trailers that the jeep pulled behind them all the while knowing that the companies that built the jeeps were unable to submit a design and build a prototype. the story of the jeep is the epitome of irony for the bantam car company. -gary m.

In the late 50's, the empty shell of the building remained with "Bantom" painted on the water tank. At that time everyone in school was acquainted with several variations of the creation of the jeep.

The Jeep is Butler's greatest claim to fame. It needs to be capitalized on in some way for tourism.

The first annual Jeep Heritage Festival will take place this summer. August 12-14, 2011. There will be a jeep parade on Friday night in downtown Butler. Saturday and Sunday will be a whole host of events from history display and history encampment to jeep challenges in the Jeep Playground. There will also be a Jeep show n' shine, things for kids to do... constant entertainment. You can find out more information here. http://www.bantamjeepfestival.com/

p.s. the person in the photo is Frank Fenn who was president of Bantam at the time of this photo. Karl Probst was cropped from this picture... he would have been the furthest left (leaning against the vehicle.

I saw the same picture informing that Herald Crist, Bantam manager, is at the driver's wheel and that Karl Probst is in the passenger seat.