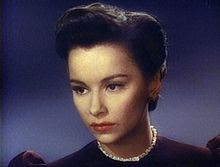 I believe her family owned a car dealership in Butler. Does anyone know what car brand (Ford, Buick, etc?) they had and where is was located in the City.

Before Ford it was a buick dealership at 9 S. Main St.

What is at the location today. There is no 9 South Main Street.

Cheeseman had the Chevy dealership in Slippery Rock. There were some other movie stars from Butler County such as Cameron Mitchell from Chicora and George Eide(?)from Mars.

Never knew she was from Butler.

My wife and I bought the white house on McKean St across from the Library about two years ago. We've heard rumors of who's lived here, but had trouble confirming. I was looking for old photos of the street online when I found this post. Does anyone have any info that could help us learn more about the history of our house? Thanks!

Since we've moved in, we've heard that Joan Caufield and Barbara Feldon lived in our house. I haven't had lots of time for research yet, but if anyone has any knowledge, information, or photos that they would be willing to share it would be very appreciated! Feel free to email me at radeyoung@gmail.com - Thanks!

Joan Chandler was at the Shakspear theatre in Stratford connecticuite for a summer season in the early 1950's. She had a daughter Ellen. We used to go to the beach.WE were 5 or 6 years old.When Joan & Ellen returned to New York.Joan took us to the Westport Icecream Parlor.Joan was very beautifull and kind.

I think that "Agent 99" from the series Get Smart had lived on Mckean Street.

Joan had a sister Carol. She was a musician and played the harp. I think she graduated in 1945. i saw her name in a book of Butler graduates

Yes, the harp! I can remember seeing the harp near the the window of the living room when I visited the library. That was in the 40's.

Is there anyone who knows what happened to joan chandlers daughter?I would love to know we were childhood friends.
Bill

Is there anyone who knows what happened to joan chandlers daughter?I would love to know. we were childhood friends.
Bill

Does anyone remember artist David Cleeland from Butler who painted many famous celebrities including Joan Fontain, Charles Lindber and did the official First Lady portrait of Mrs. Herbert Hoover. He also painted many of the portraits of Butler Counties judges which still hang in the Courthouse.

I would also be interested in knowubg what happened to Joan Chandler's daughter Ellen. I am originally from West Sunbury PA. I was aware that Joan Chandler was a native of Butler for many years. I have collected many publicity photos and magazine articles about Ms. Chandler. Does anyone know her cause of death in 1979?

I believe she died from cancer.

In response to the April 04, 2010 inquiry about artist David Cleeland from Butler, I have a painting by David Cleeland of my grandmother. It is signed and dated 1928 New York. She was from Pittsburgh, but living in New York City at the time. I imagine now, learning he was from Butler, that they may have known each other before they moved to New York. I'd love to hear more about him if anyone has any information!

What was your grandmother's maiden name?

Cleeland's father had a jewelry store and optician business on Main Street in Butler.

David began his professional career working for a newspaper in Wenetchee, Washington.

David Cleeland had worked as a Time Magazine portrait artist during the time he painted your grandmother.


Later he had a portrait studio in the Hollywood Hills and was neighbors to many Hollywood movie stars. I believe he died from a heart attack in about 1953.

There is a tombstone for him in Butler's North Cemetary, but I believe he was buried in California.

Does anyone know what happened to Joan Chandler' daughter?

I'm writing a book about Alfred Hitchcock's "Rope" in which starred Joan Chandler.
If anyone knew her or have any info about her, please contact me at simone.tarditi@virgilio.it

i knew joan and ellen briefly when the three of us were living in kenya(1973-74).i believe ellen was a craft specialist? joan was moving around the country housesitting. we shared a ride on the EARail from kisumu to nairobi. i remember she was obsessed with watergate. ellen and i swam in lake rudolph(turkana) while on a trinket buying trip to ferguson gulf. both were fun to be with.

Can anyone post a link to Joan Chandler's obit?