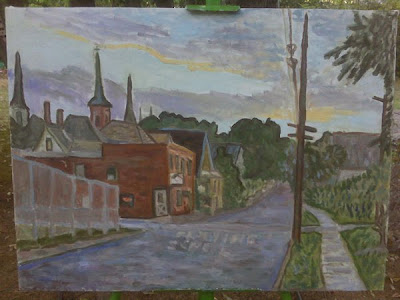 At Locust and Monroe
Enlarge

I like it. To see that someone can see something nice in our streets. Great.

Obviously created by a "special-needs" individual.

The corner building was Martins Inn at that time, now the Checkered Flag

This is a wonderful, local example of realism. I wouldn't hesitate to purchase this and hang it in my home. Especially with the provinence of knowing the area and possibly the artist, or at least his family.

City police said in the report that 67-year-old Albert J. Dowling was drinking at the Checkered Flag lounge at the corner of Monroe and Locust Streets when he observed a traffic stop taking place just outside the bar.
This picture is the scene of the crime

Same neighborhood as Vero's Market.
Mrs. Vero recently passed away. She was in her 90's.

Vero's market was located several blocks away just off the corner of E. Pearl Street and Elm.

You must be thinking of Vero's Bar (Owned by Sam, brother of Mike who had the grocery). This bar was located next door to Martin's Inn (now The Checkered Flag).

Ferguson's Market was on Locust down the street from Martin's.

I grew up in the house that was on the corner of Locust and St. Mary street.

If anyone knows if this painting is for sale or how to get in touch with the artist, please leave a note here. Thanks.

What years did you grandparents own the store and do you know what was in that building before they owned it? I remember Chester who delivered the groceries for Fergonsons during the late 60's/early 70's. The house your grandparents lived in must be the red brick house that Mayor Harry Pepper and his wife lived in when I was a kid.

I would guess my family (and Ferguson heirs) owned the store from its inception until the mid-fifties. Chester was Chester Kelly, who often took me, then a child, on his routes. I sat on an upside down metal grocery box. My mother, Mary Ellen Ferguson(Richards) d.2004, remembered when the groceries were delivered by a wagon pulled by a team of draft horses. I believe Mayor Pepper did reside in the house my grandparents built.

The backpainting was completed in the summer of 2001, and I recently revised the picture to align it with changes in my style since the original backpainting was done. I'm glad the scene is recognizable, and thanks to everyone providing backstory on the corner establishment (and other local details). -- Bob

Do you have any picturss of the market (Ferguson's) and do you know when the building was built? Maybe Charles could post the photo!

I have no pictures. The building was built prior to 1925. There were several apartments upstairs. A small railroad track went in a side door for deliveries of goods. The family also owned a large warehouse on Elm (?) down near what used to be a skating rink. It was used as a wholesale gracery outlet. That building had stainless steel chutes that wound from the third floor to the first. After a cowboy movie at the Capitol on Saturday, my friends and I would go to the warehouse and slide down the chute. I have not lived in Butler for 50 years, so I am only guessing that the street is Elm, as well. Good memories.

I remember that corner well.My girlfriend lived on ST.Mary's Street and I use to walk her home from the SS.Great memories

I lived on Elm St. across from "Fergie's" and I remember Chester as the man who gave me small bags of gumballs whenever he refilled the gumball machine.

There was an old time Coke machine and lady named "Twila" worked the meat counter. You could purchase groceries on credit.

Next to Fergie's was Ruth Ann Bakery, owned by Helen and Joe Stewart who lived above the bakery before moving a few blocks up Elm St.

Who has a picture of Fergie's? I would be happy to post it on this blog.

Martin's Bar was a the corner of Monroe and Locust. It's on the picture.

I, too would like to ask if anyone has a photo of Ferguson's market. My mother and aunt worked there when they were teenagers in the early 1940s.