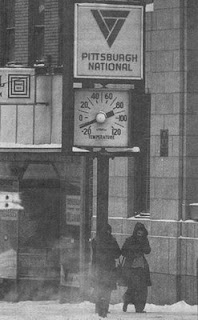 Blast From the Past — Pedestrians bundle up against the bitter cold which struck Butler County on Jan. 17, 1977 The thermometer in front of Pittsburgh National Bank at the corner of Main and Jefferson streets registered 12 below zero at 10 a.m. Subzero temperatures are in the forecast again, with the high Thursday only reaching the single digits and the overnight low dropping to minus 4. ~ Butler Eagle
Posted by Charles at 9:36:00 AM

Wow, look at that old PNB logo before they changed over to PNC.

It did work at one time, I know that for a fact because, whenever I go into town to do whatever it was I had to do, I would always take a few minutes to sit on the bench across the street from the bank and, while I was sipping a cup of Cummings coffee, I would watch the hands go round and round

it has always been 12 below zero in Butler thats why it seems that the thermometer never works.

Ooh, some cold comments here. I remember in winter 1993 (maybe '92) when we had an arctic blast from Canada come through and we has several days of -30 (yep, minus 30) and then another one with -20 temps. I found out my Ford Tempo would start at -20 but not -30 (not without putting a heat gun on the oil pan for 30 minutes at least).

I wrapped my headboard with a blanket because it was so cold that if my hand rested on the wood it would draw so much heat out of my hand it would ache the next day.

Then it warmed up to +32 and I was running around outside with just a flannel shirt on, no coat because it felt so warm.

I moved to Florida a few years later.

I do remember it being so, so cold in the 70's. The northeast had extremely cold with much snow, that the scientists said we were heading for an ice age---funny to me that now they are tooting the earth is heating up. Da--maybe the earth has climate cycles????

In the fifties, the coldest it ever got out in Center Township was -25 below because I had to wait for the school bus which, of course, was late. Believe a neighbor took pity on us and gave us a ride to school. Couple of boys in our class got their ears frostbitten because they were too "macho" to wear a hat. Also remember the great blizzard of 1950 which struck on Thanksgiving day and left 36 to 40 inches of snow. Missed school the whole next week. Enjoyed diving into 10 to 15 foot drifts like it was a swimming pool. Moved to Florida and everyone went crazy when we had flurries. Ha! Ha!

I remember school being cancelled because of the cold. My dad didn't hear the announcements and I walked to Institute Hill School and there was no one around. Thank goodness my grandparents lived behind the school.