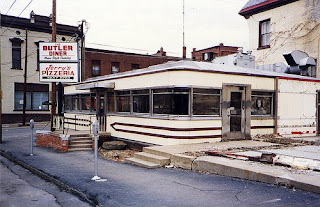 Bill Morgan's original diner in Butler at Jefferson and Washington Streets years later.
Posted by Charles at 10:49:00 AM

By the sign, we know that this was taken long after Bill Morgan sold it. Under his ownership, it was called Morgan's..and later, Morgan's KFC; don't know that Bill ever sold pizza there!!

Thanks for the picture; in the background, across the street, we see the former Salvation Army headquarters.

wasn't this the location of our first hamburger stand and the hamburgers were 15 cents, fries were 10 cents and shake for 15 cents---it was a walk up---maybe in the late 50's?

Didn't he also have the Garden Gate back then too?

Morgan's hamburger stand described above was next door to the diner. Started late 50's, The diner, as told in Bill's obit, was originally Dight's, Morgan bought it in his early 20's and that led to his career.

does anyone know what that yellow building in the left back ground was?

The yellow building to the left in the background used to be the Salvation Army. After the corps built a new facility on Wayne Street, that yellow building was used as offices for other social service organizations and, I believe, the upstairs office was a Democrat party election headquarters one year.

That updates to about 1985...don't know what became of it after that.

And, for the record, should you be interested...the yellow building to the right, in the background, is the Butler location of the William F. Young Funeral Home...by pictures I've seen since, the business has since expanded east up Jefferson Street, incorporating the old Davis Furniture Company, to the alley.

Thanks...I guess I'll always be somewhat of a Butlerite, no matter how far away I move!!

And don't forget...Bill Young was also the owner of that diner at one time during the 80's --- he called it "Digger's Diner" and the reason I know this is my mother worked there as a waitress!

I was working at the East Land Diner when one of the managers told me to dump two pots of potatoes into the dumpster. Latter on Morgan came into the Diner and asked me where the pots of Potatoes were.
I told him that I was told to dump them into the dumpster. He told me to get as many potatoes out of the dumpster that I could and wash them off.
I looked at him like he was nuts. He told me to do it or he would fire me. I went out and got into the dumpster with the flies and the maggots and grabbed as many potatoes as I could. It was real nasty because it was in August.
I washed them off and they were served the next day.
I told my family and my friends not to eat there. Morgan did anything he could to make a dollar.
I lost all respect and even today I have a hatred for him.
How can you tell that Morgan wasn't lying.
His Lips weren't moving.

This was my first job. I started when KFC was next door in 1979 and it was Morgans diner. I believe this picture should be around 1986 when the place closed down. It sat empty for quite a few years

the diner was moved in two sections and can now be found in Tarentum. My mother worked as a cook in the 50's. She developed the strawberry pie that the diner was noted for at the time. Any time a patron asked for the recipe Bill would tell them it was a secret, the product of years of research. If that patron went to the back door and asked for the recipe mom would give it to them.

Loved the strawberry pie. Can still taste it after all these years. Mmmm...

That place brings back fond memories of me and Vic Backowski swilin coke and eatin those rotten potatoes.Boy them were the days!

I was about five years old. My mother stopped to get some carry out hamburgers and left me and my brothers in the car while she ran inside. The parking lot was to the right of the dinner. Anyway, I slid over into the driver seat and pretended I was driving, accidently slipped the gear from park into drive and the car coasted backwards down the slope into traffic where it rammed into a truck that was stopped at the light in traffic. I'll never forget the look on my mother's face when she came outside, bags of hamburgers in hand. I loved those hamburgers!

Bill's Diner served great lunches
when I was working at Butler Savings & Trust. Still the best
days ever and know they will not be
repeated.

I was interested in seeing the comment that Bill has past away. Bill was raised in Meridian and we were in grade school at the same time. Others in our class were Dale whipkey, Bill McKinnis, Ray White and Tom Roe. Tom and Ray were still alive for our 60th high school reunion in 2006-yes we graduated from Butler High in 1946. I still correspond with Larry Cummings of the old Cummings Candy Store family.
That brings up another story in that Larry's wife, Mary was Mary Whitehill, a cheer leader in Butler High and her first husband,Ted Daum, was my best friend in those days. Ted was a navy pilot and was killed in a crash when he was a passanger, in Florida. Ted shipped out to Vietnam to replace his wingman, named Clussman who was the first guy shot down in that war. The natives got him out and

Ted met him in Hawaii on his way home as Ted wasa going in.Clussman still attends reunions of navy pilots and a Univ. of Cinn. fraternity brother of mine, and also a Marine pilot attended a reunion a few years ago and talked to the investigating officer who gave him a summary of the details of the crash which he passed on to me. He and I live about 100 miles apart and visit from time to time. Small world isn't it. By the way-if you are trying to add it up, I will be 81 next month and am still in relatively good health and still play golf and sail.
I have few ties to Butler anymore but Chuck sent me a note to look at the blog and I did so. I can beleive some of the things noted about Bill. He didn't have many close friends when I knew him.
John M. McCall

Spread-Heads for 4th of July!

Spice up your 4th of July boring BBQ's with Spread Heads — Ketchup Charlie and Mustard Marvin.

Replace the existing ketchup and mustard caps with Spread Heads and transform your ordinary bottles into instant fun!

Twist it, Squeeze it , Yum!

Although my father knew Bill rather well, that didn't translate to many trips to the diner. When we did go it was a real treat. The KFC was built out in Bon Aire a year or two before I graduated in 1961.
Russ Turner

I worked for Bill washing dishes on weekends at the diner in the early 50's. Hard work and long hours for little money. Was a rough boss, but, I learned a good work ethic.