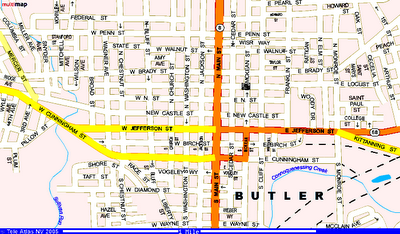 [Click on the map to enlarge it.]
Poem about Butler Streets
Posted by Charles at 5:14:00 AM

I found the street where I grew up many years ago. It was originally Schenk Avenue, later became Miller Street and is now Miller Avenue. The last time I drove on it the original brick paving, done about 1925, was still there.

We lived at 534 Carbon Street--the corner of Swan, really an alley. I hated that house. I think it's still standing, no?

My husband grew up on the "Island" and during the late 80s early 90s the guys would get together for an all day Island reunion. They would have shirts printed and on the back would be a map of what was considered the Island with streets and places/businesses they remembered. Each year the map became more detailed. It was fun to read the map and remember.
Thalia Eberle McGrady

Between McKinley Ave, and Bredin Ave. on the west end was an alley known as Pepper Avenue. At the end of the alley was the Suncrest Pottling Company. The Hassler family bottled Dr. Pepper and other flavors. They always had a refrigerator full of cold pop which they shared generously with the neighborhood kids. Some kids from that neighborhood (in the 50's) were Dennis Martz, Albert Mohn, Edgar Hassler, Jim Verlotta,
Darell Greg, Paul Reed, and Marilyn Odrey. A little oder were Jim Moyer, Adrian Hassler, and Dave Mahallic.Great times the 50's.

I need to type more casrefully and proof read - should be Bottling (line 3) and older (line 9). Anonymous.