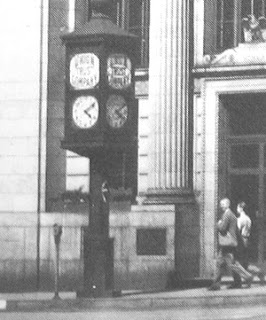 ... It was in our very center
in those days
when uptown was where
all our paths crossed.
From: The Butler Pennsylvania Poems
Posted by Charles at 11:33:00 AM

I have thought about that clock many times. Why did the bank ever get rid of our dignified, handsome clock?

The clock on Main. Always there looking out for us....keeping us on time or telling you how late you were. It's still there but I think it's not running now....probably a victim of corporate greed.

I wonder where it is? There is a different clock there now,or at least the last time I was in Butler.I suspect this one died and was too expensive or was not able to be repaired.Maybe it is stored someplace for posterity.I do love that clock in any case,many memories of it,it is a symbol of Butler.If the date on the picture is correct,I was less than a month old when it was taken,March 19,1947 is my birth date.How many Butlerites passed by and enjoyed this clock?

I recall the clock at main and jefferson in front of the pittsburgh national bank was hit by a large truck in the early 1970's when the one that is there now was installed.
thanks for the site

Now there is a new beautiful clock across the street in front of the National City Bank. PNC didn't want to replace their clock (even though it doesn't work). The clock was purchased from a grant by the Shade Tree Commission. A job well done indeed!

I'm so glad that the Shade Tree Commission purchased a new clock.....and that they put up the hanging baskets up & down the street.

I loved that clock in front of PNC. I counted on it for many years. If we couldn't have a Kaufman's clock...at least we had a Butler clock.

That old clock was knocked down by a truck and replaced by the one seen in other posts. I dont remember when it was hit.