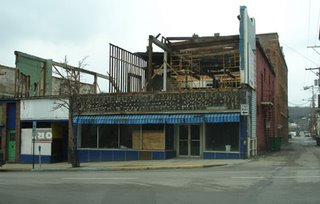 On Jefferson Street, one block down from Main Street.
Photo: Tom Menchyk
Posted by Charles at 10:57:00 AM

Years ago, that was the location of the original Friedman's Market that, I think, has evolved into several stores in the Butler area.

The original Army-Navy Store was up on Main Street and was called Nash's. It was about 4-5 stores down from the Diamond.

Yes, that's was Friedmans'store. Next door was the Fulton Market, my Dad's meat market. Thanx for the pic. Poor, poor Butler. It was such a wonderful, thriving little city, especially in the 40's and 50's.

The current owner of the Army Navy Store has moved his operation to Main Street. So, Butler's Main Street has gained another store which will help keep it lively and vital. Thanks Rich Palone for staying in the city.

LOVED the army navy store when I was a girl, it is such a shame the way butler has turned out...maybe we should all campaign to change it back to the "good old days"

I certainly remember the old Army-Navy store on Main. In the early 50's they actually had war surplus stuff but by the late fifties it was just commercial goods.

I never recall going into the Army-Navy Store. But I went past it plenty of times on my way to Exile, a record and head shop located at 136 W. Jefferson Street. It seemed funny that they were located so close to each other.