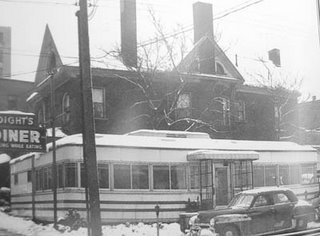 The the corner of Jefferson and Washington Streets.
Posted by Charles at 5:08:00 AM

Anyone remember when Herman Dight opened this diner? As I recall, George Stowe and Herman Dight took over the food concession at Butler Aomco. I think Bill bought the diner from Mr. Dight. I worked the midnight shift taking the food wagon to each deptartment. We also boned the hams and baked the beans for the best baked bean recipe ever! These same beans were sold at the diner.

My favorite place to hang out not to mention some dang good food!!! I spent many wonderful evenings at Morgans and truely miss it. I love in Georgia now and have a diner thats similiar but nothing could instill such wonderful memories as Morgans does.

Morgan's Diner lost all charm for me a few years back when Bill Morgan thought it appropriate to openly berate a young waitress right in the dining room for making a small, simple mistake. He turned a different color yelling at her. What an idiot.

Bill Morgan does not have the best reputation in many things.

I remember many Breakfasts with my friends at the diner. Always good and plenty to eat at a very resonable price. It was always full especially on the weekends. In all my years in Butler (moved in 1970) I've never heard a derogatory remark about Mr. Morgan or the diner.

Bill Morgan is one of the finest gentlemen in Butler. He has contributed more to Butler than anyone I can think of and I have been here a long time. Only the jealous don't like him.

Wish Bill Morgan would erect another old fashion diner. Miss the atmosphere and homestyle food, especially the pickled red cabbage and homemade pies. We need to bring the old city of Butler back!!!

Diner always had dirty blinds by each booth.

It really sickens me to see a photo or anything related to Bill Morgan.
I don't know how many peoples lives or dreams that Morgan destroyed. Bill Morgan is the worst employer that I have ever dealt with and I pray every day that he burns in hell for what he did to me and my brother.The Eastland Diner was the worst Hell Hole that I ever worked in. Worse than anything I went through in my Military Career.

he burned down the old building on brugh ave

My first job. KFC was connected to the diner. Alot of dishes was washed by my hands.

Many an hour and gallon of gas was wasted cruising around Morgan's Wonder Boy Drive-in at the top of North Main Street hill at Bon Aire.
All of Morgan's pictures were lost in a fire. Does anyone have a good one of the drive-in in its heyday?
Are you old enough to remember Harold's that was at the bottom of the hill?

I remember Morgan's Drive-In in BOn Aire very well. I met a girl there back in 1965. We married in 1966 and have been together ever since. We moved to New Jersey (job transfer) in 1970 and i really miss the old town. Do get back every couple of years tho.

Herold's is where HOJO's was located later. My mom was a Herold and worked there as a young woman. There was another Herold's located on Jefferson Street just down from the Butler Theatre. It was a popular hang out during lunch time.

My family use to own it