Stoughton's Beach ~ We Loved It 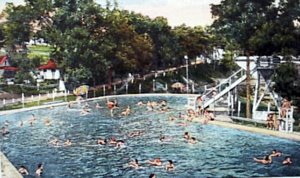 One of the best treats we had as kids was when we'd pack into the car and head up Route 8 to Stoughton's Beach.
Posted by Charles at 10:01:00 AM

They had cabins there and we used to rent one for a week every summer. Right across from the pool.

I can remember going to Stoughton's Beach for a school picnic in the 1950's. We had a good time and as young girls enjoyed haveing our fortunes told by the fortune teller.

We lived in Slippery Rock and considered Stoughton's Beach ours. We'd go down there nearly every day in summer. We used to dance, skate and swim till we practically dropped.
The summer the song, "Night Train" came out we learned "dirty dancing" from the big city kids (Pittsburgh)so Mr. Johnson took if off the juke box.

We lived close to the park, which we knew as Rock Falls Park, and walked daily to go swimming. Also used to dance during the late 50's in the dance hall to a juke box. Also went skating and I remember the Merry-go-round, concession stands, and swings. This brought back memories.

Does anyone remember Guy Tavaglio spinning records at the dance hall that over looked the pool. It was the same year that "Canadian Sunset" was popular. Can't remember anything but good times when I think of that park.

We left the Butler area and settle in the desert of Arizona. Shortly after arriving we visited Old Tucson and the movie sets there. Near the entrance to this park there was a merry go round. My mother loved merry go rounds so we made sure she rode this one. At the entance to the merry go round there was a sign giving the history of this particular one. It had only been at Old Tucson for about two years at that time. Prior to that it had been on display at the Smithsonian in D.C. for about seven years and before that it was permanently installed at Rock Falls Park, Slippery rock, Pa. I couldn't believe my eyes ! I remember as a kid riding this very merry go round many times. Do you remember the two big roosters that were there ? What memories.

Thanks for the above comment, Bill. Using your comment I was able to make a posting about the carousel. Have a look [28 Sept].

I can still smell the chlorine in the water. I, too, danced there in my teen age years. The place had a particularly warm atmosphere which remains in my memory very clearly. It was like another Alameda Park, which was the essence of fun.

"Hi guys, I really enjoyed this information about Stoughton's Beach ~ We Loved It, is very interesting, I would like get more updates about this"

Good memories of Stoughton's. My brothers built our cabin in the late 30s or early 40s, aptly named it "The Butler".I remember the popcorn stand with a huge tree growing out of its center and I spent summers working there.Corporate picnics, reunions, school picnics and even summer camp for a football team kept the penny arcade, the shooting gallery, the roller rink and the dance hall busy.