Saxonburg celebrates its founder's 200th Birthday Anniversary ~ John Roebling is the Inventor of Twisted Steel Cable that made it possible for him to build the famous Brooklyn
Bridge. Congratulations Saxonburg. 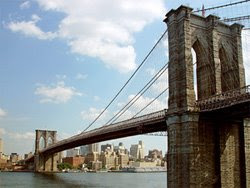 Email ThisBlogThis!Share to TwitterShare to FacebookShare to Pinterest
Labels: Tribute

I mean no disrespect for the folks in Saxonburg. But I had to wonder while looking at the photo. Did John Roebling get his inspiration while twisting his wirery beard one day? Congratulations to a proud town.
BMc

There was a ice cream store in Saxonburg were my father used to take us on Sunday drives around the countryside. They had the best ice cream I ever tasted.

It's ironic. Saxonburg persists in perpetuating their pedestal for founding-father John Roebling. They conveniently, understandably leave out "the rest of the story."

And it's THEIR story. If recollection of local history serves, Roebling came to the region, laid out and oversaw construction of his little piece of heaven, invented the wire rope (which I discovered is the Roebling "rope" even used on the Golden Gate...and a whole lot more major suspension bridges), and began its modest manufacturing.

Roebling was a man of substantial intellect and business acumen, and soon realized that Saxonburg was possibly one of the worst places on the barely-civilized planet to grow both a business and major new industry. So after a decade of struggle getting raw materials in, finding capable, skilled labor from among his renegade-reject colonists from the Motherland, he determined to right his misadventure.

And so it was, almost in the dark of night, Roebling departed the town he founded and now for some silly reason ...maybe there aren't any/many others? ...they continue to deify their defector. In fact, history notes that he literally took every person who had any kind of skill, potential, or brains.

Which in the end might explain why the remnants proclaim their rejector as the 'Burg's main man!

Oh, btw, in case you were wondering, Roebling kicked the dust of his Gomorrah from his boots, never to return. His son Washington allegedly made one appearance at one of the little village's early and now nearly uncountable festivals commemorating its beginnings. Or was it the founding of the Saxonburg Carnival? Whatever, it would seem Saxonburg's heritage is the leftover dregs. Oh well, let's go celebrate with a brew at one of the 7 or 8 bars that have become the real monument to this funny little place. And let's drink to Roebling, ever thankful he didn't take us with him. Otherwise we may have had to work!

Btw, he and his offspring all became wealthy making and selling that Saxonburg wire rope and their bridge-building genious. All from their newly founded community of Roebling, NJ.

And now we know the rest of the story.

That ice cream parlor where your dad took his children for a treat?

Schroth's ...had 2 sizes ...6 and 12 cents. Had tables around the room with magazines stacked high. Where every young boy got his early glimpse and education of what lies beneath ladies dressing gowns!

Remember the Roebling story while growing up in Butler. Never heard he left town (in the dark of night like the Baltimore Colts ??). In the 50's Saconburg was famous for its' baloney.