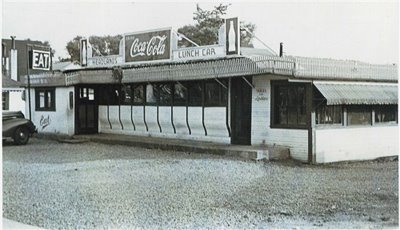 HEADLAND'S LUNCH CAR - owned by Bob Headland and his wife, Etta, in the 1930s and 40s, it was situated on W. Cunningham St. just east of the Clinton Hotel and Sullivan Run (creek), next door to Ray Andre General Tire and across the street from Klugh's Market and Adolph's Drug Store. It serviced not only Butler residents, including many from Armco, and a lot of through traffic on the then busy Rt. 422. [Don Carlson, the photographer, and his brother, Bill, worked there in the late 30s for $12.85 a week plus all they could eat.]

Did this later become VinMar diner?

I can't remember the lunch car. I do remember when Ray Andres had their grand opening and going to the celebration with the other kids from the Pillow St. neihborhood. I remember drinking so much free pop and having a belly ache after. I don't think the lunch car was there then. I was born in 1940. When did Ray Andres open? Garris Graham

The concession stand shot has the photographer's younger sister Joyce in it - standing in the middle!

This is a particulary memorable place for me. My grandma lived right across the street in the Flat Iron Building, up over Klugh's market. My uncle Erd worked at Ray Andre's filling station. I worked at Adolph's as a soda jerk in 1943-44. I remember how the "crick" used to flood when it rained real hard. Headlands had little boxes alongside the booths where you could make your selection of records.
I remember the Ink Spots singing Till Then and Into Each Life Some Rain Must Fall. Ray Andre's was open even in the 30's but I don't know when it first opened. I also remember Jumbo tires.

Incidentally, I would like to know what relationship the photographer Don Carlson has with Tom Carlson. They lived on Miller Street and we were childhood friends.

Butler had several other diners - Dan's at the top of New Castle Hill, the Shell on W. Kittanning St., Dight's,later Morgan's on Washington St. Surely there were others. No more blue plate specials!

My father worked for the Dights when they owned it. I, too, was born in Butler. I have XMAS photo of the Dight's employees from 1947.
If there are more photos, please post. I have one with my dad & two of the waitresses.

Don and Tom Carlson were indeed brothers. Don died in 2010. He was my dad.

My father used to talk about Headland's Diner but I never saw a photo of it. Growing up he lived beside Klugh's market. Klughs owned the double house where he lived. Parking for the store was behind the double house. That double house is where Pizza Hut is now.