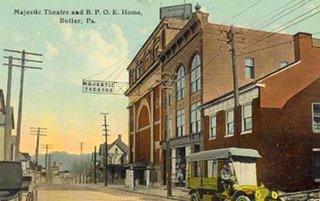 I remember the Majestic Theater well. My aunt Alice came to live with us on Miller St. in the 1920s so she could play the theater pipe organ at the Majestic. She would, on occasion, take my brother, Bill, and me with her, seat us in the first row behind the organ and we watched silent movies while she played. When "Our Gang" appeared on stage, she brought the cast to our house so we could meet them.

Unless someone knows more exactly, I'm guessing the Majestic building is about 100 years old. Anyone know?

It was only showing movies when I was a kid. By the time I was in High School (early 60's) it was where they held the Prom or Prom Party.

Last time I was in town, it was a doctor's office.

I remember going to a slot car track in the basement 69-70 ?
Was a pretty cool place.
BMc

In my last year of junior high and the next 3 years (61-64) we went to dances in the YMCA (now the Cubs Hall) and to dances at the Majestic when Clark Race from KDKA would bring in some of the Pittsburgh "stars" whose records we listened & danced to.

I remember going to the Majestic for dances---one song I remember but no one else (in the last 40 years) seems to know is "Hazel". We didn't dance to it---we would all stand around and sing it--goes like "Hazel, Hazel, you shouldn't have done it. Hazel, Hazel, you're doing me wrong. Won't you come back to the one who loves. My heart is calling--Hazel come home." Does anyone remember this? I can see us standing around in the Majestic in our full skirts just a singing away?????

I love to remember the Majestic theater. When I was real small my mother would send me and my brother on a Saturday morning to see the cowboy movies and the Flash Gordon series. I remember the Lone Ranger, Johnny McBrown, Sunset Carson, Hopalong Cassidy, Gene Autry, Ken Maynard and a host of others. Children got in for $.10. Adults $.25. Later on they added a tax of a couple of cents which made us all mad. I still remember the cliff hangers.

I was wondering if Don Carlson is related to Patty Carlson? I remember a sleepover at her house when we were youngsters, right before she moved away to Minnesota? I totally lost track of her.

Just caught up with the Nov. 7, 2006 question as to whether or not I am related to Patty Carlson. Yes I am - she is my niece - my deceased older brother Bill's daughter. Pat and her husband live in California, are retired and recently completed trips to Sweden and China.

I too can remember the "oaters" at the Majestic. My uncle was named Guy Ewing and he used to MC the Amatuer Hour shows here and my aunt Nora also played the piano and organ. Guy could dress up like Charlie Chaplin and act the part and looking at photos of both of them, I could not tell which was which. All of this must have been about 1938-40. Gosh-how time flies!!

I am wandering just how old Don Carlson is? I wander also if he remembers some of the people living on Miller Street in the 20's. The Wagners, Rettigs, Fredericks?

My dad was an usher at that theater that is where he met my mom ...and I remember when I was a teen we used to go there for the record hops, I remember watching the groups sing while we danced ..it's a shame kids today dont get the chance to do somethings like we did back then

In response to the question as to how old I am, I'll have to admit to just turning 86. At one time, I could name every family on the part of Miller St. to the north of Penn St. since I delivered the Butler Eagle there. I still recall many of the names. South of Penn St.,I knew some of the families and remember Clyde Rettig. He and I bought identical new Chevrolet Club Coupes in 1941. Quite a car - I wish I still had it.

We also had 4 movie theatres in Butler.My mom used to take me to town on Saturday to a movie and she didn't have to worry if the movie was suitable for me to see because they all were.

The class of 1960 had its after prom party at the Majestic building. The prom was at the Castle Roller Rink. Imagine that today!

Vic c said.. turn of the century my grandma Olive Phelps did the laundry for all the actors and others. The boarding house across the street became the Geible funeral home. My dads first job was to deliver the clothes,for his mom.