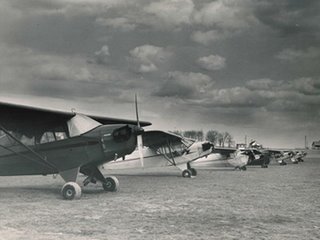 BUTLER AIRPORT - small planes lined up at the old Butler Airport which was located along New Castle Road just across from Deshon Hospital and is now the location for a shopping center. Bob Headland was one of the early promoters of aviation in the Butler area. (I flew in and out of this airport and Pgh/Butler airport in the early 40s before enlisting in the Air Corps.)
- Don Carlson
Posted by Charles at 10:35:00 AM

One beauty of a picture! Thanks Don.

The picture is one I took of small planes lined up at the old Butler Airport which was located along New Castle Road just across from Deshon Hospital and is now the location for a shopping center. Bob Headland was one of the early promoters of aviation in the Butler area. (I flew in and out of this airport and Pgh/Butler airport in the early 40s before enlisting in the Air Corps.)

Hello Charles,I transferred some old 8mm Films to VHS Video a few years ago for the sons of Harry Hein who has a business and residence at 463 S.Benbrook Road,Butler,Pa.The films showed a rather large;possibly 8 or ten passenger plane taking off and landing at the Butler Airport.I don't remember the name of the man in the movies,but I know he used to be a Manager of Warehouse Sales on Highway 422 West.The Plane looked like something from old Vintage Movies.Thanks for sharing,Richard L.Sanders

My very first plane ride was out of this airport with my Dad when I was young enough to sit in his lap. I remember he paid the pilot $5 for a spin in a Piper Cub. At this stage in my life, over 60 years later, I have flown over 3 1/2 million miles commercially.

I recall that a plane used to swoop down and, without stopping, pick up mail from this airport about 12:30 every day. On one occasion he dropped the sack.

Frank, I think that Air Mail plane was a blue Stenson, wasn't it. But I always thought that the mail was picked up up somewhere on top of South Main Steet hill.

They may have picked it up on South Main as well, but I remember it falling in the Highfield region, where I grew up. I was very young and envied the older guys who ran toward where it fell.

How many of you remember Al Defoggi?

I never knew Al Defoggi but knew of him and his talent as an aircraft mechanic. Heard nothing but good about the man.

While working for WISR (680 on your radio dial) I had the assignment to take pictures of a housing development on a hill (Butler is nothing but hills). So it was out to the airport, into a Piper Cub (have you noticed that all small planes are Piper Cubs?)

Leaning out the door at 300 feet, I took the photos needed without falling out of the plane. What a braveheart was I...young and indestructable! Quite a thrill was that first plane ride. This would have been last century-1953!

As I recall Lew Steiner was the fixed base operator and flight instructor. I remember Al Defoggi as the A&E and while I never met him I knew who he was. I lived in Greenwood Village as a kid and used to walk to the Airport at least once a week during the summer. Lew used Aeronca tail draggers for instruction

I lived across the street from Rob in Greenwood Village. Al DeFoggi taught me a lot. I got into model aqirplanes. I then got my pilots license. I am no longer current.

Lew Steiner used his Piper Cub to do aerial tricks at the Farm Show.

I remember this airport very well. When I was 10 or 11, I and several other boys hiked to the airport and one of the pilots gave us a ride for a $1 a person. The strip was grass, bumpy and rolling. Was like riding a roller coaster when we took off and he flew us all over Butler and Armco. First and only time I've seen Butler from the air. You haven't really flown until you've flown out of a grass strip in a small plane. When I was a teenager, a Cessna flown by an ANG pilot tried to make this airport after losing power but crashed behind the Milhind plan. Fortunately the pilot only suffered minor injuries but the plane was totaled. One of my buddies ripped off an altimeter from the cockpit as a souvenir.