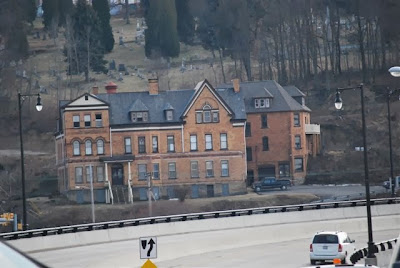 I lived in this building in the mid-70's when, for lack of a better term, it was a strange apartment building, i.e. wide hallways and big, wide doors (as you'd expect from a hospital). Tile floors were replaced by creepy, crappy carpet; fluorescent lights were dim and weird as well. The former owners always had a 'dream' of making this a grand location in which to live, but that never happened. By the picture, I see that subsequent owners have removed the wrap-around porch that was on the center and left side of the building. I wonder if the heating system is still a gas-fired boiler. This is a piece of Butler history that has barely hung on through the decades; no one's really cared beyond rent collected and (some) profit earned, I guess.

This was not a hospital during my years in Butler. I never gave it much thought but it must have been kind of eerie to look out your hospital room window onto a graveyard.

That building was once the Butler Hospital.

This was the original hospital in town and it was built in 1898. Andrew Carnegie donated $5,000 to help with its construction. It is here in 1901 that Mrs. Kathrine Soffel was taken after shooting herself in the chest during the Biddle Boys shootout with police in Mt. Chesnut.

It was replace in 1922 by the Butler Memorial Hospital dedicated to those men who died during World War II.

Clearly you meant WW I, but thanks much for the back story on this iconic building. Makes me want to research Biddle boys and Mrs. Soffel.

My Dad told me he had his tonsils removed here.

I always thought it looked creepy.

When I was young and riding in the car with my dad he would always tell the story of his grandfather having his leg removed in that hospital.

Is the building used as an apartment building now? Can anyone just walk in and look around?