In a Cave in the Netherlands ~ 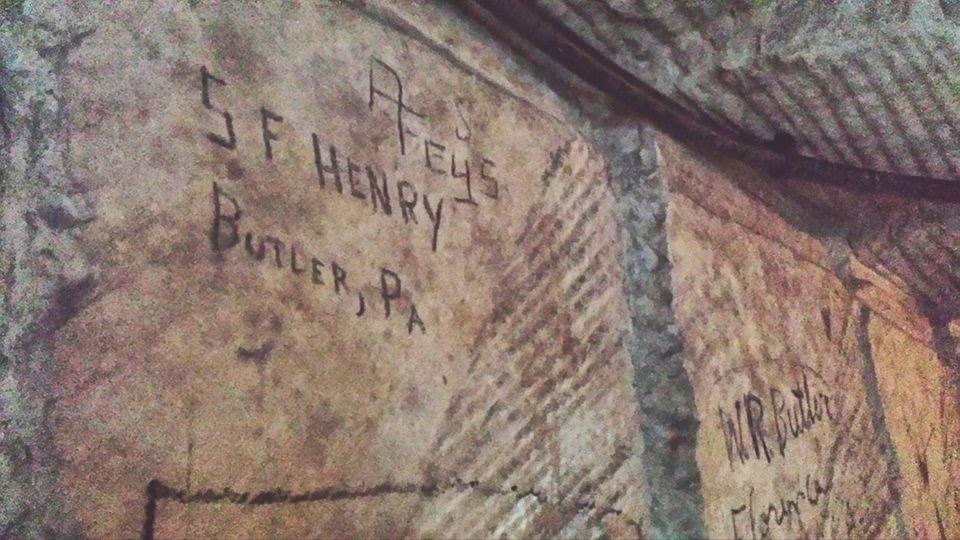 Photo and Comment: Dan Roxbury
While in the Netherlands recently I visited the Velvet Cave. During WWII the cave, where I found this soldier's name, had been used as a shelter for the public and also by American Troops. Many soldiers have inscribed their names in this sandstone cave. I knew about this prior to visiting the cave and had been looking to spot where the soldiers wrote their names. The first thing I spotted was "S F Henry Butler PA". At first glance, I thought this was possibly my grandfather Henry Dottle from Butler PA. I was blown away because Butler PA is where I grew up, and I saw it written 2 more times. This was by far the highlight of my trip! I know my Grandfather was actively serving in Europe in 1945 when most of the names were written inside the cave. I will always wonder if he had been there or if he knew the other men from Butler who were.

Do you know the other 2 names that you saw that had "Butler PA" with them?
Thanks

You meant "Henry." Contact http://www.butlerhistory.com/ to see if they can look up the name in old newspapers. I did that once and was successful.

Samuel F. Henry and Nancy I. Henry were children of William & Margaret Henry. They are found in the 1940 census records living on Saxonburg Rd. in West Deer Twp., Allegheny Co., PA. William was a coal miner at the time.

Thanks you all for the comments. I believe this is the obituary for the soldier (Samuel F. Henry): http://m.legacy.com/obituaries/butlereagle/obituary.aspx?n=Samuel-F-Henry&pid=19456732&referrer=0&preview=True

Hello. I have the photos, but I can't make out the names. I'm going to request that they be uploaded to the blog so you can see them.