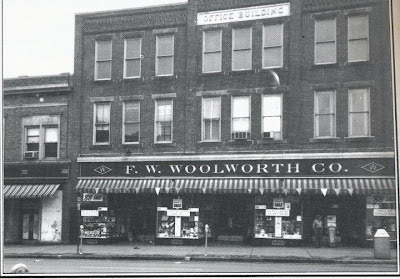 Any idea on the date of that photo? I recall that store front as well as that on the G.C. Murphy's store.

Many happy times spent in that building during the 60's through 70's. Checking out the latest 45 rpm records in the basement. Going to look at the turtles in the pet section and playing pinball at the front entrance. Also, I can't forget the donut making machine near the front of the store. Boy, were they good.

Grants was on the same side of the street but down past Jefferson Street. A great store, too.

I think W.T. Grant's was in the next block north about where Ralph's Shoes used to be in the 1960's-70's. Anybody else remember the mynah bird that Grant's used to have. I think his name was Carmichael.

I thought the bird was in Woolworth.Anyone remember the colored peeps and bunnies at G C Murphy? So many happy memories we have .

I think Carmichael was at woolworths,also remember the peeps and bunnies. I know that there was a Grants but for the life of me I can't picture it's location.The lunch counter at woolworths made a good grilled cheese. That's what I ordered,cheapest sandwich on the menu and all I could afford.

I remember the wood floors but the outside of the building had been remodeled by the time I'd go in there with my grandma. The front was covered with large light gray tile-type blocks, as I recall. The mynah bird was in the back right, as you faced the front of the store. Nice memory. Troutman's was catty-corner; Honse furniture across Wayne Street on same side.

Correct on the mynah. Definitely Woolworth's. We never did teach it to curse!

I believe Grant's was North on Main several blocks from Jefferson. I think they rebuilt in the hole left when Offuit's Dept. Store burnt down. The, when Grant went broke, they put a J.P. Penny's store in there.

I enjoyed when Woolworth put up the balloons at their lunch counter that you broke to see how much your banana split would cost. Seems that the prices ranged from 1 to 99 cents.

That's right! I'd forgotten about the balloons until just now; thanks! Course, my mother and grandmother were either so strict or such health nuts that I never tasted a bananna split at Woolworth's, but I remember the balloons.

Offut's was where the old J.C. Penny, now Dollar Store, was. Offut's took over from Duffy's Department Store. The grandson, Bobby Duffy, is partners in Marc Jacobs fashion designers in Manhattan. Offut's burned to the ground in the early 50's and was replaced by J.C. Penny.

Butler used to have a great downtown. Clean streets and lots of good stores to shop in. The entire Main Street used to look beautiful at Christmas time. If anyone has a photo of that time we wish they would send a copy to Charles for posting.

One of our elderly veterans, at the VA Hospital where I worked, wrote us a scathing letter demanding that his appointment be rescheduled because we had made it on a Friday, and Woolworth's had macaroni & cheese on Friday and he was NOT going to miss out on it! We did reschedule!

My godmother a 5th grade teacher would take my sisters and I to woolworth when we got our report cards. If we got all A's & B's we were allowed to order a banana split and pop a balloon to see how much it cost! Those were great memories! Thank you Auntie Carole!

This site takes me back to when I was ten. When we came to Butler we always stopped at Woolworth's for a hot dog on those split buns grilled to perfection and I'd forgotten about those balloons with the banana split prices. I had a few of those too. Also wasn't there an "All Walk" cross-walK at the park area? Great memories...and we called it a five and ten...never heard dime before. LOL

I remember riding the mechanical horse they had downstairs!

I too had forgotten about those balloons, but now I remember getting a banana split for a penny. Grants was gone by the time I have memories of downtown as my uncle worked in the stockroom at Penny's. He worked his way up from there to become the manager of their largest store in the country at that time. Also remember Murphy's as they always had a good selection of toy soldiers. I also would like to see some photos of Main Street at Christmas from this era if anyone has some.