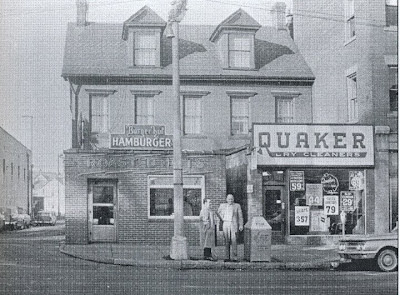 Dang, now I want a Sharpie with chili.

Anyone know the history of the house in the background? It must have been very beautiful in its day.

There used to be an alderman or a Justice of the Peace located in that house back when the building on the other side of the alley was the A&P store.

The building was the home of the George Reed family. The son, Alfred G. Reed, died from wounds received at the Battle of Fredericksburg on December 13, 1862. He died on December 27th, 1862 in a Washington, D.C. hospital. If look at the canons at Diamond Park you will see the local Grand Army of the Republic (Civil War Veterns Group) was named in his honor.

Concerning the last comment please refer to the blog entry:

always liked their food, much better that hot dog shop

I loved their split-pea soup.

I spilled some of my chili sauce on some dry cleaning next door at Quaker's - the manager slapped me silly and threw me out.

Back in the late 1940's my older brother would go through the narrow passageway between the Hamburger Hut and Quaker Dry Cleaners to the house in the back where in a front room on the ground floor to the right he would reluctantly take his weekly trumpet lesson. One time I followed him back and got a glimpse inside that dark and mysterious, and very fine old house, before he told me to get lost.

So many hamburgers at this place when my father took me with him into town on Saturdays. And if I was really lucky, a piece of the banana or coconut cream pie. Still one of the best hamburgers I've ever had and that pie was pretty good too.