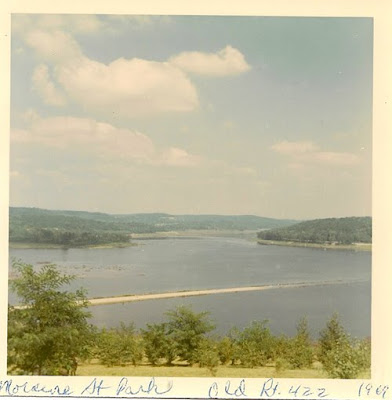 This picture was taken in 1969 when Lake Arthur was beginning to fill. You can see the remains of Old Rt. 422 before it was covered by water.
Photo: Barbara Bloom
Posted by Charles at 9:42:00 AM

I remember walking across that part of old 422, with Lake Arthur just knee deep at the time, when I was a kid, actually, a sophmore in high school. Nice pic...

I remember that, too. Thanks for posting...

I got a job there that year, what a great job. Lots of times I didn't even go home because we worked such long hours and it was a long drive home, slept at the park. Summer of love it just didn't get any better.

'69 was the year I got my driver's license and I remember driving on old 422 watching the new 422 being built up along the hill to the south. Then driving out here every weekend to watch the lake fill in over the old road. A crowd of people would gather at the water's edge. Thanks for the memories.

Groundbreaking for Lake Arthur dam was Dec 2, 1965, the gates were closed May 15, 1969 and the lake reached its operating level April 3, 1970 much sooner than the expected 18 months. Some people had predicted that it would never fill up because of underground caverns and old mines in the lake plains. The driving force behind Moraine State Park were two couples Mr & Mrs John M Eisler and Mr & Mrs Frank W Preston. There was an old railroad under the lake also. The Western Allegheny RR ran from Brady's Bend to New Castle and followed Muddy Creek from Rt.8 into the lake area and old towns of Isle, Nealey and Barber, paralleling old 422 westward past the dam site. Final run for this western section was Sep 15, 1939 for the RR now beneath Lake Arthur. Does anyone remember the little amusement park and picnic area just west of the present dam site and accessed from 422? I think it was called Shawood Park?

Left the area before Lake Arthur was built but I do remember crossing Muddy Creek on Rt. 8. Was a very swampy area and would be classified as wetlands today. Also drove down old 422 many times going to New Castle. Googled the lake and it looks very impressive.

I launched my first sailboat from the road in the fall of 69. Flipped it over in the middle of the lake the same day. Learned a lot. Sailed on the lake until 2000.

I left Butler in 1966 so I missed most of the evolution of Lake Arthur. It must have been really something to watch it grow day by day. It sure is a beautiful lake and park now.

Many good memories of this place. Back in the 1970s Moraine State Park used to be the best place to spend a summer day. Park used to fill to capacity by late morning. Park management briefly closed the entrance leaving many sitting in their cars out to Route 422. Very few people go there now. Many picnic areas never seem to get mowed during the summer.

Great photo of old 422! The park is one of the most well attended in the State Park system at 1.7 million visitors a year. The previous post must have visited during a rainy day. Many forget the popular North Shore facilities were developed later, visitation now is more dispersed. The park frequently gets good reviews for maintenance. At nearly 17,000 acres, it is not feasible, nor practical to keep all areas mowed to golf course standards.

Shawwood Park - My Uncle Stanley Shaw owned and operated the park for years up to Moraine State Park takeover. Entry road off of 422 (road and roller skating rink pad is now used for maintenance purposes by the park). There were were several picnic pavilions, row boats, dance land, merry-go-round, bumper cars and other carnival type activities. My grandmother sold ride tickets in the ticket booth (like an old phone booth).
John Kellar
john.kellar@aol.com

5 years after you commented... But how did they fill it? Bunch of trucks? Pipes? Not old enough to have witnessed the filling. But I go the lake Arthur all the time!

Were there houses moved to create lake arthur?

Filled by the Slippery Rock creek.

Thank you for correcting me. My mistake.

Does anyone remember what it was like to cross muddy creek at route 528 section? There was a bridge over it for cars, but how wide and deep was it if you were George Washington hiking over it on foot? Did it freeze over in the winter or still had water moving when it was 0 degrees outside?

Does anyone remember were the bridge was out of Neely's point.