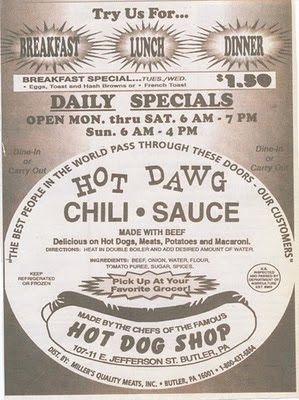 An ad that appeared in the Butler Eagle Bicentennial Edition
July 4, 2000

I wasn't there then, but I have great memories of that place from the 60s and early 70s.

In the late 50's the hot dogs they sold were produced by the Butler Packing Co. owned by the Daum family. They used a secret family recipe for the dogs and they were awesome. I can truthfully say I have never tasted a better dog in 60 odd years. Sadly economics forced them to change the recipe because of competition from Swift and Armour. Where have we heard that before.

Will Millers ship the sauce?

I have never had their hot dogs but would love to try them.
I am anative of New Castle, Pa.
and for the past 50 some years were raised on some of the best hot dogs I have ever eaten.
When I lived in Ca.I met people from my area and they wanted me to bring home sauce with me.
I still take sauce out to California because my Daughters, sister and Mother all live there. We have all decided that P & O Hot Dogs (and sauce) are the very best sauce in the world.
I will try any and keep an open mind. Where is this place located?

Patti saddly the shop is closed however the sauce can be bought at Millers meats which is located on Main St in Butler, actually it's only a block from the shop. Are you speaking of the Coney Island sauce? I have had that and it is good but a different taste than this one.

The new Butler Hot Dog Shoppe is now located on S. Monroe St. It it next to Oesterlings Weed and Feed and API automotive. They sell the same hot dog sauce from the old Shoppe.

My father and one helper made all the pies for the Hot Dog Shop. They were well known for their pies as well as for the great Hot Dogs.