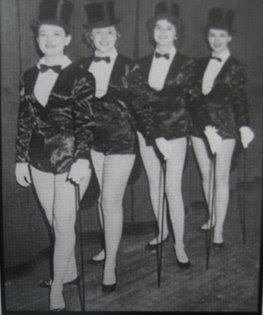 I never heard about these gals.Can someone enlighten me? Must be an interesting story.

Same here...I grew up in an Armco family and never heard of these gals...

I'm with you guys. Never heard of this group. Dad worked there 40 years.

I've heard of Barbara Schultz...she later married a man named Norman Risemeyer --- but I'm not familiar with the other three

Joyce Smith is now Joyce Wigton. I talked with her recently and said the show was just for Armco employees. They only did a few shows. She does not know why they stopped.

They stopped because they knew Obama was going to become President and ran for their lives. HEHEHE!

Dude, the election's over. You lost. Stop whining, loser. Being angry and an a@#$ole is no way to go through life, son.

Indeed, the election is over. And now we're all losers, it seems. And ensuring our children and theirs will be likewise.

Still, these gammy gals might help us to forget for awhile ... and for those who were there, remember.