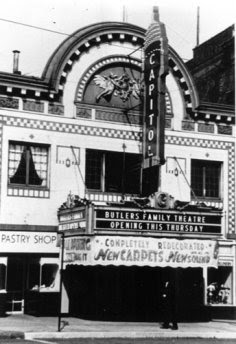 At the turn of the last century, the two properties that The Brick House now occupies, housed vaudeville theaters. The Lyric Theater occupied the space where the main bar and dining areas are today. The Capitol Theater is above the game room / banquet room. In the 1940's the Capitol was converted into one of Butler's five movie houses. Legend has it that Houdini performed and Herbert Hoover campaigned there sometime along it's storied history. Movie house records, found in the rafters, indicate that hundreds came to see movies on a nightly basis.


The Capitol Theater is still intact today on the second floor. In the early 1970's the Capitol side of the building was purchased and renovated into a restaurant by The Eat 'n Park Corp. where it remained until it's late 70's move to New Castle Road. Their renovation carefully protected the key elements of the Capitol Theater thus preserving this Historic site.
from: brickhousebutler.com
Posted by Charles at 9:17:00 AM

Wow, my dad would drop us off with a quarter each for the Saturday double feature. After watching Roy and Gene save the West, we would amble up to Aland's Toy Store to spend the change, and then go to my dad's work to be driven home late in the afternoon. Good times.

I don't remember the Capitol.I was abig movie fan in my youth and went frequently to the Butler and Penn theaters.The Majestic was closed in those days and already offices were there,time frame 1953-58 or so.
From the picture,I'd guesss it was approximately across from the Penn on main st.Can someone help me with it's location?

It was located where the Brick House is now. Butler City Council allowed the beautiful facade to be destroyed by Eat n' Park in the 70's. If you look at the back of the building from up Main Street you can see the portion of the build which was used for the scenery drop. Also, Harry Houdina supposedly appeared at he capital hung upside down from outside the theater.

I too remember hours of watching Roy and Gene on that screen. Tarzan too!

John Logan who lived on Lick Hill went there each week and became a "gopher" for the manager, "running errands in exchange for admission." There was always a trip to "The Hot Dog" for food for those who worked there. That was in the days when the movies came on reels and projectionists were necessary to change reels and rewind. The picture of the theater provoked many memories for him

So, youse guys had to spend $.25 to get into the Capitol to see the "News of the Day" (sometimes with Lowell Thomas narrating)and the week after week serials of Superman et al? Well, I got news for youse....they jacked up the price....it was 10 cents with a penny tax...I think!

Now, if youse had the moola, youse could get a nickle hot-dog or hop across the street to Isleys to get a nickle ice cream soda (milk shakes were 15 cents and the splurge, a banananananana split, was 25 cents) or you could go scrounge for empty pop bottles that had a 2 cent deposit on them which you hid in bushes on the way home from school to be collected and turned in the next day for another nickle bottle of Pepsi ('Twice as much for a nickle too...Pepsi Cola is the drink for you!")

Recently, on TCM. "Yankee Doodle Dandy" was shown. I remember going to see that movie with my Father at the Majestic Theatre (which was reputed to have rats running around just before it closed) and I thought it was in technicolor.( not the rats...the movie) It was not. So much for tricks the mind plays on you.

The only problem was that no one had any money...the nation was coming out of the depression, Roosevelt was God (except to some for whom he was Satan), all the teachers at Institute Hill were women and the janitor stood at the entrance to the boys toilet watching everyone prior to going outside for recess. The girls went down another set of stars and heaven only knows what they did.

And the band played on.

It was a great place. I loved this theater. I still dream about it.

There was a cleaner located in this building before The Brick House. The old stage from the theater was still there and not used by the cleaner. The first set built by what later became The Musical Theater Guild of Butler was built on that stage. The production was "The Pajama Game" Directed by bill Lehnerd and Produced by Carl Gnade.

I REMEMBER 2 THEATERS BESIDE EACH OTHER ,USE TOO LOOK AT THE PICTURES ,OUTSIDE WAS IN DREAM WORLD.

GOT LOCKED IN BUTLER THEATER, FELL ASLEEP. WOKE UP HEARING THE VOICE OF MY FATHER. THE MANAGER HAD TO OPEN THE THEATER IT WAS AROUND 3 IN THE MORNING. IT WAS LIKE A CASTLE TO ME.

From the Butler Eagle Progress dated March 25, 1994. The Capitol Theater opened about 1927 and was refurbished around 1939 and then operated as a second run companion theater to the Penn Theater. It was across main street and down a block from the Penn. The Capitol closed about 1951 and the building served briefly as the local Republican headquarters for President Dwight Eisenhower in 1952. The Capital Building was sold to Eat-n-Park in 1976 and later the Brick House.

ATTN: Bob Dorcy. E-mail me and I'll give you more history about Butler and N. Chestnut St. I havn't seen you since you went to the Air Force. Shamrocm@yahoo.com

I could get into the old Capitol Theatre FREE because my mother rented several rooms on the second floor when I was just a little tyke and she had a Dress Shop in there until they closed. It later became Jack 'n Jill Dry Cleaner before the resturant acquired the location.

When did the front of the building come down? I don't remember it at all.

The front came down in the 1970's when Eat n Park bought it and destroyed the facade.

This was a great old theater. I remember during the depression when it cost $.10 to get in, they would have food drives and you could get in by donating a can of some kind of food. People were really going hungry those days. The big star was Shirley Temple. I loved the capitol theater. The Penn Grille was near by and we all used to have our cherry and lemon cokes there, so very very long ago.