The Day They Moved a House ~ 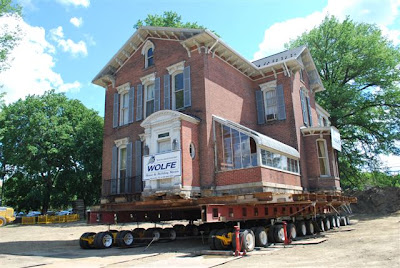 A house on Main Street.
Photo: Robert Emigh
Posted by Charles at 4:16:00 AM

WOW what a move!

Are they living in it yet?

We are lucky Armstrong finally agreed to move this house. There had been a very pretty house here until the 1970s when Ron Forcht sold it to Nationwide who then destroyed it. Armstrong begrudgingly sold to these people who have helped make this neighborhood look a lot (no pun) better. Too bad Armstrong with the nearly billion dollars in assets don't do more to help rejuvenate the downtown area. The greedy Sedwick's only give money for small events that they can use to promote their company. Just think what they could do with the Penn and Majectic Theaters!

Oh if the evil rich people would just spread their ill gotten gain around to the rest of us. What a wonderful world it would be.

yes they are and in a few years it'll look like it's always been there. what an awesome house.

went by this home last summer in it's new spot. It is a wonderful old house and I understand the couple who bought it want to restore it to what it once was?

To the "ill gotten gain" poster. How about the fact the Armstrong was granted a monopoly for the Butler Area. They were given a liscense to become rich. In your world, if I owned the only water source in town and everyone had to buy from me I would then have no responsibility to give anything back to my community.

You must live under a rock. I get my internet from armstrong and from consolidated. I have choices. I can use cable or dish. I have choices.
You Socialists just hate to see anyone rise above the others.

Hate the rich. Spread the wealth.

I guess that your family was going to start a cable company but those nasty Sedwicks came along and took what should have been yours.

When did you ever see my belly? Are you a peeping Tom? You don't know who I am.

You are just another Socialist know it all.

I am a bit puzzled by your ability to know that an anonymous writer would smoke, drink, be overweight and need exercise. You even know that I am a "he".

no they only think they know everything ie: obama

Youse guys are a bunch of pantiewaisters! Youse call that 'arguing"?

"Pshaaaa!", I say. Dial up Usenet and see how the big boys do it.

Let's get back on the subject of the house, huh?

What an amazing thing to see! I met my Dad downtown and we watched this together. Not the entire move, but most of it. Pretty cool!

I don't think Charles meant this blog to be a "Venting Place" for mean hearted people, who probably do very little to support change and renewal in my home town of Butler. Put the negative energy to some good use and help out with getting main street and our neighborhoods back to the way they were meant to be!

Armstrong was involved more than you may realize! Copy this link into your browser and watch!
http://www.butlerdowntown.org/index.php?option=com_content&view=article&id=97:video-of-historic-hourse-move&catid=1:latest-news&Itemid=50

I am quite familiar with this family and what it took to move this house. Armstrong did hold off on their demolition plans and that is the FULL extent of their contribution. They saved demolistion costs, made it into a great PR moment (as the above mentioned video shows) and stuck with their firm commitment of not contributing a single dime the project!

Thank you! I rest my case regarding Armstrong.

The family that bought and moved this house aren't contributing to Armstrong either. Ever notice their "Direct TV" dish on the Penn Street side of the house? Armstrong didn't contribute a cent to this project, so the family isn't gonna pay for their cable services either!