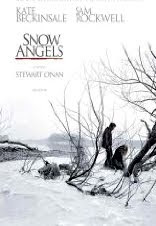 Email ThisBlogThis!Share to TwitterShare to FacebookShare to Pinterest
Labels: Books about Butler

Arty Parkinson, the protagonist of this fine first novel, returns one Christmas to his hometown of Butler, Pennsylvania, to confront his haunting past-specifically, the winter of 1974, when he turned 15 and two terrible things happened: his family fell apart, and Annie Marchand, the young neighbor who had once been his baby-sitter, was murdered.

There was a movie released based on the novel but its location was changed, and filmed in Canada, I think.

A read I would describe as befitting the setting chosen by O'Nan...gloomy and never quite delivering anything of substance or character.