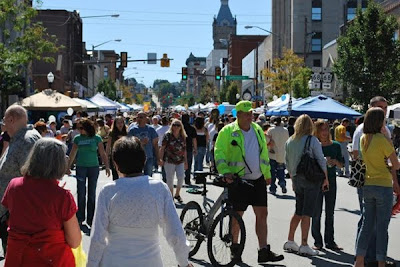 Email ThisBlogThis!Share to TwitterShare to FacebookShare to Pinterest
Labels: Tribute

People complain about no where to park downtown. Thousands of people roamed Main Street during this festival. Where did they park?????

umm alot walk after parking on side streets

It just wasn't what it use to be

what did it used to be?

it was known as ''The Ethnic Festival'' it's now just an extension of the fair, farm show and cruisapalooza rolled into one

I love this picture and title right after a pix of the new Jail!

Well,different does not mean better or worse just, well,different.Back in the late 40's early 50's(am I that old?)one didn't need parking in Butler,at least those who lived in the city.All you needed was downtown,or uptown,depending on where you lived.There was an A&P (grocery store) on main street across the alley from the burger hut.One at the southeast corner of Washington and cunningham,one at the north east corner of Washington and Brady.Numerous corner stores(Phils,penn st,Kozy Korner,pearl st,Kempers,Elm street,Doria's and Jack mckean's both on Mercer st and many more) Town had anything from clothes to appliances that one might need,all in walking distance from anywhere in the city.No car,no problem.Anyone remember Moe's Dime
Delivery? He would pick up your groceries,appliances,whatever and deliver to your house.
Don't get me wrong,I loved cars and when i got my license in 1963,I loved it and wouldn't dream of walking if I didn't have to.

Now ,however,I think of how nice life would be without car payments,upkeep,insurance,gas etc,etc.

Speaking of buses, ever notice the empty BART buses that are seen all over town? It is rare for them to have more than several riders and some times I see one bus following another. Looks like a lot of tax money going up in smoke to ruin the ozone layer.

Why does everyone one get on here and complain about the way Butler is? Butler is a great town, yes we have our issues, but doesn't every town or city. Some of you need a life!

And many of you need to get OUT of Butler for once and realize that it really IS NOT a great town, or even a good one, any more. Every one I know who has left hasn't come back other than to visit family.

H U D has done a lot of damage to Butler. Also the VA Hospitals campaign to bring drug adict in has been painfull.
There is no pride of ownership in an inter city H U D and low cost rental area.

if it smells like a turd ..it is a turd

polish...why would you touch a turd?

Moe's Dime Delivery...Moe Geibel and his red pick up truck. Kozy Corner was the nice neighborhood store (Franklin and Brady Streets, I think). What was the one further up on Brady, across from the produce stand, catty corner from the big Presbyterian Church?

Kozy Corner was the one up near the hospital on Brady Street. The one on Brady and Franklin was called The Inn. [Would be great if someone had a picture of them I could post.]

I would love to move back to Butler it was a great place to grow up but the reality is there is no work that will pay enough to support a family even in a basic middle class lifestyle.Thats why I left.Other than armco what else is there that will pay 30-50k per yr locally. This is a problem going on all over the country with jobs going overseas and its going to get worse and no solution in sight.

I have a family owned retail store on Main Street. 100 k per year for me. Come on back.

would never ever move back... i live in a nice warm place now!!

Maybe we are better off without you.
Butler still has a very viable downtown area, unlike alot of small towns.

What a mean-spirited thing to say. THAT's why people leave and don't return.

Stay where you are. I'm sure you can find plenty wrong with wherever that is. We tend to find what we are looking for. Sounds like you expect Butler to be bad so you see the bad.
If we open our minds we can see the glass as half full and not half empty.

To James Z.--Miss you at ABC in Tampa Bay Area!

james was a bad boy!!! he got fired for being mean to his co workers! Dont miss him here!

I was just wondering if anyone could tell me when the old woolworth's building collapsed?

for those of you who think butler is a great place to live you need to get out from under the rock your living under and take a look at your nasty HUD infested town, the best job in butler PA is being a HUD landlord, if you dont have the right last name to work at the prison or your not eligible to live off entitlements then sorry there is not much future here, then again maybe you could be a public official, or mayor so it seems no thinking is necessary for those positions in butler pa.

HUD is the biggest problem in Butler. When a city looses pride of ownership, it is lost.
We can thank the VA HOSPITAL for bringing the scum bag dopers in for us. Also thank Perry O'Malley and the redevelopement authority for some of our troubles. Remember the Wishing Well goof ups?
Thank a do nothing Mayor....a nice person when we need a real leader. Let's ring in the arts. We'll all hold hands and sing Kum bi ah when what we really need is leadership.
Clean up the City, put Police on the beat, get rid of the $$$$ Fire Department $$$$ and bring in the volunteers. I'm sure the volunteers can go put out the City fires after the buildings are destroyed just like our current crew.
I wish I could be Mayor for just one day. I bet I would be hated for years.

Remember Rico's penny candy store on the corner of Morton and Spang? If my mom needed anything we either ran up the hill to Rico's or ran down the hill to the Al's Viaduct Market. I cut Mrs. Rico's grass for 5 bucks and she always let me take a cold pop from the cooler when I was done working. I grew up on the South Side. Go Blue Streaks! BAMFL Champs 1988 and 1989.