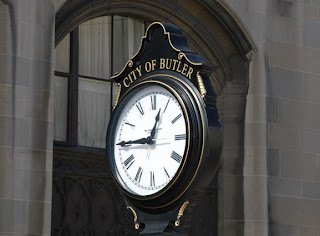 It has a bold look without being overly ornate.I also like the roman numerals.Nice clock,hope it keeps good time.

A fine addition to the Main Street, You should consider networking with the moms in the bizymoms Allentown community. I am sure they too will have many wonderful things to share.

and to think the one thing butler had that was unique was the cross walk bells.... and they took them out! go butler! I live in another state and when i talk to strangers that knew about butler, that is what they said they remember. way to go butler. Another piece if history removed.

that cracks me up, people that use to live in Butler complaining about what is and has gone on while they decided to bail out. If you don't live here don't worry about what goes on.Move back if your so concerned about the bells.

thats why they moved out.. people like you!! sounds like a obama socialist talkin . mad because someone else made better for themselves! and butler is full of them. good thing you got out cause butler stinks!

I am still in Butler, I have made a good life for myself despite of all the goverment funded halfway houses and drug addicts compliments of the VA hospital.You should come back and experiance Butler post bells.

So... Butler got rid of the bells and kept the drug addicts?! How do the druggies know when to cross the street? Maybe Butler can get some stimulus money to study new methods to get druggies safely across Butler's busy streets. Ten, twenty million dollars oughta cover it, don't you think?

I would love to see the VA leave town!!!!! The people need to know about the VA bringing drug addicts in for treatment and then cutting them loose on us as they are placed into our neighborhoods to start a new life. If you love your kids you better spread the word. The VA might help some veterans but they are killing our town. Call the VA and demand to know about the domicillary program. It's a one way trip for dope into Butler PA.

I tried calling the VA, but they wouldn't give me any drugs because I'm not a vet. Discrimination, that's what it is!

Butler is probably the safest place to live to avoid a terrorist attack. everything happens here ten years later than everywhere else!

when you see a sign that says butler city run and run fast, it is one of the grossest towns in america as soon as you hit the city limits you will know, you will smell the stench and start seeing the dysfunctional people walking by, most toothless and strug out, and your typical crack head in denial on each corner, the schools obiviously dont teach math anymore, and the parents are too wacked to care, the po po on a secret mission but no one told them what it was so they are rendered useless but welfare enrollment is up, the meth clinic is booming, and the new prision is 50% full so thats a good sign, the west end is now ghetto, and garbage lines every street, wow what a great place to live