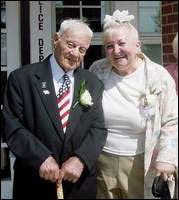 Congratulations to you
Abie and Christine
on your
Wedding Day

Congratulations Abie & Christine.
There are not many of us around who remember the story of Abie and his experiences in WWII. I was the Butler Eagle photographer/engraver at the time and vaguely remember making the engraving for his picture in the Eagle to go along with his story. Shortly after that, I enlistd in the Air Force and eventually ended up in that part of the world also.
Don Carlson

Does anyone know why the city is tearing down the old Chandler Bakery on the Southside?

Another memory of childhood--Potato Bread; Jane Chandler and her Irish Setter gone by way of the wrecking ball!!

The Chandler Bakery building is coming down due to the fact it has been vacant for years. A few months ago part of the roof fell into the building. The walls where buldging and it was full of asbestose and black mold. The owners did not have the funds to demolish it so the city is taking it down and claiming the land.

Mr. Abraham is a true hero and after all he's done for this country and the vets, its great he's found happiness in this stage of his life.I've read[and still have] his book Ghost of Bataan when I was a kid and it made quite an impression. Congats

This is for Abie Abraham if someone can relay the information. I watched a Military Channel show about the raid in the Phillipines. During which I believe he said his first wife was in San Tomas. If she was a Prisoner there, she may have knew my Grandfather. If someone could help me, I would like to speak to Abie. My email is ekeyser73@yahoo.com. Please relay the information and have someone contact me so I may speak with him.

This is in response to the January 7, 2011 posting. According to letters written to our local paper Mr. Abraham recently turned 98 years old. He is a patient at the Veterans Health Center in Butler, PA. Don't know the status of his health or if he is able to receive visitors or phone calls.

Just wanted to add...My mother volunteered at the Butler VA hospital for 38 years. At her funeral several years ago, the entire volunteer crew showed up. I met an elderly gentleman dressed in a business suit, looking in great shape. He introduced himself as Abie Abraham. I had heard about him for years, but never met the gentleman. Trying to make small talk, I asked how often he goes to the VA. He replied "I'm there 8 hours a day, 7 days a week." A Vietnam vet myself, I was amazed at his commitment. There's nothing else to say. Hats off to a true soldier.