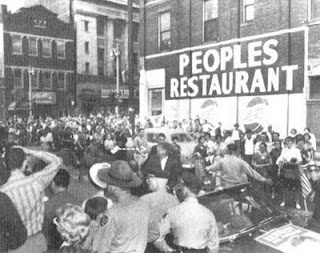 On Wayne Street at the corner of Main. This photograph hangs in Natili's restaurant.
Photo: Mary B. Gordon
Posted by Charles at 7:47:00 AM

Wasn't that something, when they could still ride safely in open cars. Natili's is the building in the upper left of the picture' the Masonic Lodge is to its right (Furniture Galleries store was at street level) and the building with the People's Restaurant sign is now where the post office sits, part of that entire block that was torn down for'urban redevelopment'.

I just saw Dubby Natili on my last trip to Florida last month. Also a pen-pal of mine in Calif. her brother Ray worked at Natili's.

Peoples Restaurant! The best greasy eggs in town for a late night breakfast!

Remember the Nixon Hotel on the Diamond renaming itself Nixon Lodge during thecampaign? Dick Nixon and Henry Cabot Lodge ran against Kennedy and lost.Actually Lodge had lost earlier being a Massachussett's Senator to John Kennedy in the early fifties. Maybe things would have been better off for the later President Nixon having Lodge as VP than Spiro Agnew,moral majority poster boy/crook.

Is there anywhere in Butler to get a decent breakfast ??? (dont mention the chains i.e. Eat n Park, Kings, fast food barf) they inspire this query!

I worked at Dixon's Drug Store across from the Mellon Bank. I had to work the day Kennedy came to speak at the court house steps. I could see Kennedy, with his dark tan standing out in the crowd.

Natili's still has a big business. Probably the number one restaurant in Butler.

Once one experiences real Italian food ( in Italy), one realized just how mediocre Natili's is.

natilis has great food, but employs some of the scariest looking women in butler that alone makes it hard to keep an appetite.

I was 10 years old the day Kennedy came to Butler. I was getting my hair cut at a shop on an upper level. We could see over the crowds. One of my uncles was on the dais with Kennedy. That was more interesting to my family than Kennedy. We lived in Herman which was then 100% Catholic. Everyone was going to vote for Kennedy.

We ate at Peoples reasturant and as a kid I worked there. John Lerr and Doretha owned it and It was so funny when the bars shut down and the drunks came in. If a fight broke out John the little short Greek would run to the cash register and hug it, telling old Alice to call the cops and he would wrap his arms around that register yelling in broken English no fighta in my place ! I call the cop. Lol good memories and fun times.

I remember that day like yesterday... After we saw the future president we went to natili's. Randy Roth and Vinny played "Mustang Sally" 75 times.