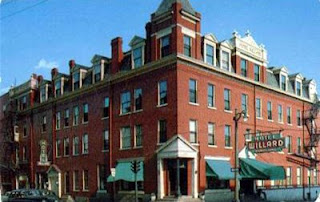 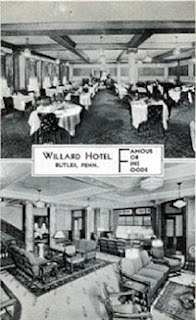 This beautiful building was destroyed by the Butler Redevelopment Authority who had a couple who wished to buy and restore this hotel, but instead sold it to Butler County Ford for a parking lot. This debacle is right up there with the tearing down of the Butler Theater for a drive-in bank. The lack of vision from our community leaders has led to a downtown with run-down buildings and vacant sidewalks, except for the drug dealers from the northside of Pittsburg who hang out.

How did the town ever allow that to happen? Obviously apathy is a key factor!
The makeup of that Redevelopment Board needs to be studied by the people who care.

The Willard Hotel was seedy, crumbling, nasty... anything but beautiful. Not that the parking tier is a any better. You're right about a lack of vision.

Had many a fine meal there. The atmosphere was sedate and uplifting.

Indeed. Twas once an elegant, lovely wining and dining spot.

That had deteriorated into a rathole that needed eliminating.

Remembering and cherishing memories is a good thing. Or at least not a bad thing. Unless we allow and enable yesterdays to get in the way of tomorrows.

The days of Butler's Willard Hotel, Butler Theater, and many more fondly-remembered haunts were great for a great many. But it's our chronic wallowing in what was that becomes Butler's disability for reaching toward what can be. And all the while we're working like crazy to persuade others that historical preservation is the key to tomorrow.

With few exceptions, this nurtures a graveyard.

Historic preservation is a form of real property recycling that should be used more often. Many cultures and other places do that and remain vibrant, forward thinking and living societies. But it takes some advanced thinking and planning on the part of political leaders, which is all too often missing in small towns. Too bad.

For example??? Can you lend some insight to what Butler politicos might be doing vs. what they are?

What was the reason for not selling it to the couple who were interested in renovating? Where else do out of town people stay besides the Days Inn? That was a sad place 20 years ago and gets sadder each year. Look at the Saxonburg Hotel or the Frostburg Inn. They did great jobs.

We had class back then, didn't we?

From previous posts that said the Williard was run down and a rat hole. They must not have read that a couple was going to restore this building. But, Tony Johns who owned Butler Count Ford was on the Redevolment Authority and wanted the lot for his trucks. So, being an old boy network of yinzers, they felt that a truck lot was forward drive thinking.

Visiting Butler three weeks ago I was astonished to see the number of buildings that have been demolished. We had a wonderful dinner at Natili's. And toured the Lowrie-Shaw home restored by the Historical Society, directly behind the Courthouse. Apparently, it had been boarded and vacant throughout the years I lived in Butler. It was interesting to share that experience with my daughter and grand-daughter. It would be wonderful to see the downtown area regenerated...perhaps through an organization like "Main St. USA".
Linda Heath Rowsey BHS '70

We would all like our hometown to be as exciting and alive as it was
when we were enjoying fresh experiences. Times change,places and people come and go. We can either remain open to new ideas
or live in the past with our pleasant memories. Malls,shopping centers,and franchise businesses
have changed everything.

Does anyone know the name of the bar that used to be here at the Willard?