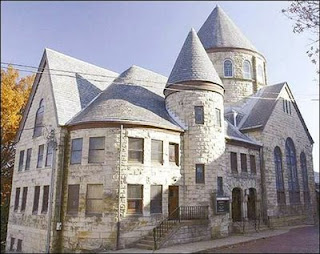 Just off the Diamond facing the Court House.
Impressive Butler architecture.
Posted by Charles at 11:42:00 AM

I heard that this old landmark was up for sale.

This church was is now Grace Lutheran. Luckily, another congregation took it over. Several of the hurches are being canniballized by First United Methodist which wants to vacate their beautiful church to build a big box church in the suburbs to satisfy the ego of their pastor.

Churches aren't buildings anymore than we are our biceps, butts, and bodies.

I hear 1st United Methodist is exploding becausse they get this message, and have succeeded in shaking off the shackles of tradition and the "club house" mentality and denominationalism that is killing congregations. And the folks who are wandering away from the classic church edifice/monuments are starved and searching for Christ's love-in-fact. It would seem these folks who are finding a fresh fellowship home @ 1st Meth are ministering to people in lieu of worrying about the stained glass and aging organ bellows.

And so many wonder why the once-mainline churches remain on the fast-track to fossilization. Must break God's heart a whole lot more than 1st Methodist's dietary preferences.

you DONT NEED a church to worship! there only there for the money

I am not originally from Butler but am sure that this church must have a fascinating history.I am hoping someone will post something of intrest.Its funny how much has come and gone in a place like Butler since many of these great old churches were built ,but like most small towns in America they have managed to survive and some are going very strong.

That was my family's church. Every Sunday I went to Sunday School there. (At least when I couldn't weasel out of it *grin*.) And afterwords, when we were lucky, my Dad would treat us to KFC or dogs from the Hot Dog Shop.

As a teenager I gave part of a sermon there one time. My cousin got married there. Lots of memories for me at least.

My grandparents and father were members of the Second Presbyterian Church. It was a glorious old building that I remember, as a child, loving to sit in the pew, my grandfather on the aisle and the rest of us stretched out with probably no real pattern. I was fascinated with the tiny glass sacramental cups that held grape juice and what looked to me to be small, puffy cookies. I was not allowed to partake and felt a little left out.
The tall circular tower in the picture had a beautiful painted ceiling and, I think, small round windows. I would sit during the sermon, when not distracted by drawing on the program, staring up at all that open, enclosed space.
My grandparents donated the organ sometime in the very late fifties or very early sixties in memory of my grandfather's mother. I'm under the impression that it has since been replaced--only 50+ years old!
Russ Turner

Does anyone know if Dr. James Manor was the pastor of this church at one time?

Dr. James Manor was the pastor of the First United Presbyterian Church at the corner of McKean and Jefferson Streets (also a large stone church).

I grew up in this church and remember some very fine people from the congregation...Mary Lee Zorb, James, Steve and Bruce Berdy, Jim Taylor and Alice Magill, Harold and Virginia Hutzler, Judy Kinzer, Paul and Donna, Paul's little brother, Bruce Baker, Carl Colley, so many others. I lost touch with most of them but still remember them fondly as well as Rev Ross, Rev Ted Garfield, Seneca Hills Bible Camp in the summer. You are right. A church is not a building. It is what the church stands for, and the people.

I too have fond memories of growing up attending this wonderful church.
It sounds to me like you were there around the same time. Rev. Garfield was wonderful, as well as Rev. Ross. Seneca Hills holds fond recollections too.