The House of Jaffe ~ Tapers ~ 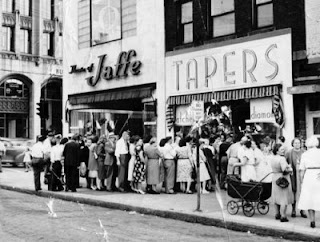 Email ThisBlogThis!Share to TwitterShare to FacebookShare to Pinterest
Labels: Stores

I have to put these buildings at the corner of Main & Jeff.Anybody know the year?

we bought our wedding rings here in January 1946.

We have been married 63 years

Back ih the 70s, I worked at Pittsburgh Home Savings & Loan, which was where Jaffe's is in this picture. Maybe it is still there, I haven't been back to Butler in 29years.

it's still there goin strong, just like the rest of town.

I remember Jaffe's quite well. It was THE place for the ladies to shop. Perhaps I remember it because of their cute little grand daughter I preceded by one year in high school. They lived way out on Mercer Road and were very gracious to purchase two tickets to my boy Scout ice cream festival fund raiser.
Tapers--not so much.

I still have the blue star and red star saphires that I bought at Tapers when I lived in Butler in the 60"s. In fact I wear the blue one all the time.

I don't remember Tapers at all but I do remember Jaffe's. I worked at Friendship Federal Savings and Loan and Jaffe's was a great place to go browsing at lunch time.

I went to high with Joel Jaffe. I wonder where he ended up. He was quite a character but also very intelligent.

Help me here, I remember Jaffee's above Troutman's passed Cunningham Street--maybe late 50's/60's. This must be a different location and probably in the 40's????

Jaffe's had lovely clothes. I still own and wear a dress I bought there in 1982.

Jaffe's then moved to where Ralph's Shoes was last located (Now a second hand children's clothing store). After Monky Wards moved to burb's, Jaffe's moved to its last location in what is now the Holly Point Building.

I don't remember ever going in the store but I passed it a million times. In the late 50's I mowed and raked their lawn for something like $3 a pop. Mrs. Jaffe always called me the "gardner" although I was just a high school kid trying to make some money. They were nice but a bit picky. Ha! Ha!