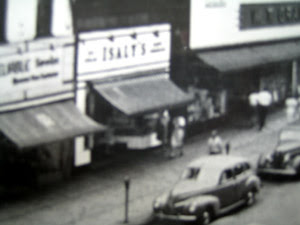 Our Downtown Isaly's
The stop-off on Main Street.
Posted by Charles at 11:52:00 AM

I remember the Sunday blue laws and ISALY'S was about the only thing open other that a drug store or two. And who could get by without chipped chopped ham and a dill pickle.

Oh my! Chipped chopped ham and a dill. I was thinking of this last week, I can't find chopped ham anymore in my area of FL. Guess everyone is getting too fat conscious! I used to ask them to shave chopped ham for me here but it was never, ever the same as a Center Ave. Isalys!

Nobody touches their chip-chopped ham!

We most often visited the Islays at the Point by Thorofare Market.

For years when I was a child, I, and later my siblings as they grew older, would walk to my grandparents home on Butler street in Lyndora every Saturday morning. My Grandmother would take us to Butler on the bus where we would first attend a movie at one of the four theaters. But the real treat would then come when we walked to Isaly's on Main street and my grandmother bought us each an ice cream soda which at the time cost 15 cents!

You CAN still buy Isaly's chipped chopped ham around here....thank goodness for that! I remember back in 1970, 71 and 72...when I came home on leave from the Air Force, there were two things I hadda have once I got home - my Mom's spaghetti and meat balls, and at LEAST a coupla pounds of Isaly's chipped chopped ham! I'd eat the stuff just as it was - no sammich fer me! Ahhh, the good old days!

One of my most fondest memories as a child was my Dad stopping at Isaly's after church on sunday and picking up a couple pounds of chipped-chopped ham and those huge, wonderfully crisp dill pickles! Mmmmmmmmmm...lotsa Heinz ketchup and I was in heaven!!!

I loved maple walnut and butter pecan ice cream cones. They were huge and shaped like a fat banana leaning over. They also had wonderful sundaes called tin roof. They had chocolate syrup and Spanish peanuts on them. My parents used to park on Main Street with my brother and me in the back seat. They just watched the people go by. We could hardly wait for our treat, an Isaly's cone for a nickel. I am talking the 1930's.

When I was 2yrs. old until age 14 ,my grandparents,mother,sister,and I lived in an apartment building on Main St.owned by a gentleman named Flowers. Our apartment was directly above Isaly's.What more could any kid ask for? Skyscaper cones,fountain coke,chipped chopped ham,dill pickles,and don't forget the Jumbo! All just a short trip down stairs...aaaahh GOOD TIMES!! Needless to say... I became a permanent fixture there.

I'm still carrying some of the pounds from their chipped ham and ice cream. I think we went to the store in the Bon Aire Shopping Center. I think they were a chain because I remember there was a store in Greensburg.