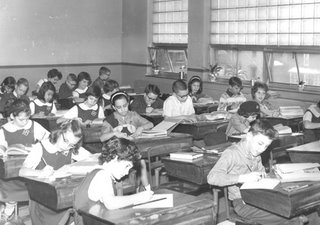 Not really fair to post YOUR class at St. Paul School and then ask if any of us recognize anyone!!

In the front, lower right..that's James Bellis, whom I've not heard hide nor hair of practically since then; as I recall, he went to Moniteau High School, out in the country, while the rest of us went to BHS.

On the left side, front to back: Paula Conerty; Theresa Langland; Shiela McCloskey...

The next row (behind James Bellis); third girl back is Anna Tanaka; behind her, Barry Garber.

In the next row, white shirt,short hair and glasses, yours truly (James Zambroski--what a fabulous life he's had so far!!!); behind moi, Timothy Jewell; OH, OH, WAIT...I just remembered...in front of me..is that Janet Toth?

The row next to the window; the girl looking at the camera..is that Janey Green..and then the girl in the dark hair, two back..Susan Hovis.

To all the rest of my classmates, forgive me..it's a combination of I can't remember and I can't see faces in the picture well enough. After all, it was 44 years ago.

While we're at it, let me post my email: jpzambroski@yahoo.com.

I currently live in Louisville, Kentucky, but in the next 48 HOURS, I'm moving to Tampa, Florida, where I will begin a job as an on-air reporter at WFTS, the ABC affiliate in that part of the Sunshine State.

Funny, Charles, how even to this day, you remain a teacher. I initially wanted to dismiss this site about Butler, PA, a town I left long ago without much sentimentality. But, as it's been, I've grown attached to this website and the memories (good and bad) that have come up with the pictures from time to time.

Although I had already gone on to BHS by this date, I recognized St. Paul's School right away. Wow.

It sounds as though your site has been invaded by a worm Charles. Per haps there is a program to religate it to www.bigotsareus.com.

I love this site,good bad or indifferent but I don't feel it is a place for such ignorant ravings.

You can see my name at the top. Bob

Isn't that Ellen Leefer sitting by the window?

Isn't that Gordon Frissora back in the corner?

These pictures bring back many memories. Does anyone remember penpals from Germany and learning the Lord's Prayer (which we had already memorized in Latin for the mass)and Silent Night in German? We had some experiences beyond the basic curriculum that year. In today's public school 5th grade classrooms, the teachers would spend most of the year teaching the test.

Wasn't Jim Zambroski the first student to lhave long hair at St Paul's ? I went to school with his kid sister. She was the first to wear slacks in Jr High . Thay were the hippest!

I believe this is a picture from St Paul's due to the girl's uniforms. I think that is Nancy Heath sitting up front with the dark curly hair. If thats correct, this would be a 2nd grade class.

Thought I'd add this recent obit...Denis is in one or more of the pictures..

Former Cranberry police officer Denis M. Bohan was supposed to have spent Aug. 4 at his son's graduation from the Indiana University Police Department, but he didn't live to see that special occasion.

Mr. Bohan died Aug. 2 in Good Samaritan Hospice in Pine of cancer. He was 54.

"That was one of the disappointing things. We had arranged for him to go by ambulance to the ceremony to pin Scottie. ... He was very proud of him," said Mr. Bohan's wife, Joy.

Mr. Bohan worked as a Cranberry police officer for 26 years and witnessed tremendous growth in the municipality. When he started with the department in 1976, he was one of four officers and the only one on the night shift. The department has since grown to more than 25 officers.

For many years, Mr. Bohan took a special interest in arson investigation. His colleague, Sgt. David Kovach, worked with him for 25 years and described him as a "good all-around officer" who went about his duties faithfully.

"He was an officer who, anytime someone was called upon to help with a community event, he was always one to volunteer," said Sgt. Kovach.

Born in Germany while his father was in the Army, Mr. Bohan graduated from Butler High School and Butler County Community College. He was a police officer in Virginia for a time before moving to Cranberry.

He quit working in 2001 when his health deteriorated.

"Everyone in the department gave him some of their vacation time to stretch the time he had off," said his wife.

Mr. Bohan was a trustee for the Fraternal Order of Police and enjoyed playing basketball in the annual Police Olympics.

In addition to his wife, he is survived by his son, Scottie Bohan, of Bloomington, Ind.; a daughter, Alexis Bohan, of New York City; a sister, Karen Esper, of Butler; and two brothers, Frank Bohan, of Butler, and John T. Bohan, of Washington, D.C.

A Mass was celebrated Aug. 6 in St. Ferdinand Church in

That's Tom Rheem sitting against the windows between Jane and Susan. I think Zamrowski got every body else right except maybe Tanaka, isn't that Josie Vanderzi? Who knows ? FYI I didn't go to Moniteau I just moved out of town I still went to Butler, and I guess this must have been a couple years before your famos phone call huh Jim Z. from J.B.

james zambroski was fired from the tv station in may for being a hot head and losing his temper with a co -worker in Tampa.

I was in 5th grade at St. Paul's School in 1960. I immediately recognized the school because of the girl's uniforms which I wore daily. My teacher was Sr. Campion; I will long remember her. I have just come upon this sight today, and am filled with nostalgic awe.
Mimi McCorry