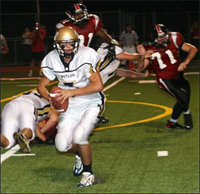 Typical record. No excuse for that at all, especially the consistency of the poor level of performance..

Well, its not just recently either. For a school of that size to never produce a WPIAL let alone state champion in at least the last 40 years is simply pitiful.

This is especially true given the fact that a single graduating class produced 3 NFL calibre players, the Sauls and Terry Hanratty.

cathell isn't to blame. he was a pawn in bernardi's chess game.

Don't know about the pawn thing as I haven't lived in the community for over 30 years. I do know both coaches mentioned so far have exactly the same number of WPIAL and PIAA titles though, ZERO!

Again an unacceptable tradition of underachievement for many, many years.