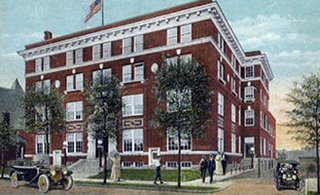 Now there was a place that formed a lot of who I am today. Pump McLaughlin; John McCaslin; Jim Young, John "Oogie" Pringle to name a few of the employees with whom I had contact as a youth. So hard to believe that was 40+ years ago.

Where is the new YMCA or is the Y gone?

The new Y is at the corner of Penn and Washington Streets.

The Y was a part of my young life,learning to swim,pistol range,day camp and gym.I think,however,my fondest memories come from my teen years and friday nights at Tumble In.The gals would be together while the guys walked in endless circles around the gym floor,stopping to dance to a slow one with a special girl.I used to really look forward to friday nights,the dance and then cokes at the Main Restaurant(now Natile's north).

The "new Y" moved to Penn and Washington sometime in the 60's - I remember walking across the street after school at Emily Brittain Elementary to play ping pong!

Who could forget TUMBLE INN! too bad we don't have anything like that for our youth in Butler now 2/2007 maybe we wouldn't have so many heroin addicts

Does anyone remember how badly the handball court smelled1 Wheehoow! I can still smell it in my mind. What a strong memory. How abot the tanning booth at the bottom of the steps before you went up to the gym? Remember the old guys who used to swim in the nude? That was weird. They would get arrested today. Times have changed. God bless Pump M.

Where is/was this building?

The old "Y", or the "Cubs Hall" is on S.McKean Street between Cunningham and Jefferson. I went to kindergarten in this building in 1963, before kindergarten was a regular class in elementary schools. There were two classrooms, one downstairs and one up on the second floor, Mrs. Dufford. I remember we were allowed play time on gym mats, but only if you could tie your shoes again afterward.

TUMBLE INN! I got my first kiss from a girl I met there. And the nude swimming at the "Y" was not just "old" men ... any male taking a swimming class had to swim nude. Oddly, the women didn't. Never could understand that. Same thing in the Junior and Sr High swimming classes. Until co-ed classes, all males swam nude.

In the early 1940's I was a "nude" life guard at the YMCA. I also was a life guard at the summer camp on Slippery Rock Creek. We played a lot of basket ball there and later would attend the Friday evening dances

Ah, Tumble Inn - a place for youth to come of age (and show off). A friend who shall remain namelss had his dad's new Buick (1959 with big tail fins) and pulled up in front of the old YMCA and proceeded to show off his parallel parking skills. The tailfin caught a telephione pole along the curb and put a big kink in the car and the driver's ego.

Ah, yes I sure remember Tumble Inn!
What fun we all had...there and the Herman Firehall.

I remember Tumble Inn. Every Friday night (especially after the football game when I could wear my Sequinette uniform and my gold courdroy bunny-fur cape) we would assemble for dancing and romancing. I was not allowed to go until I was in ninth grade (even Funerama was off limits before that age!), so I really felt grown up going.
Mimi McCorry

I remember YMCA day camp. We were bused out to the campgrounds and then came back to the old "Y" building for swimming classes. Mom used to work overtime on getting me out of the house for at least part of the summer. Went to Lutherlyn for a week and another church camp (Baptist I believe).

The Purple Underground at the Y, in the first half of the 70's - Oh Yeah - Now That's What I'm Talkin' About !
"Do not go gentle into that good night.
Rage, rage against the dying of the light."
Party On, My Middle-Age Friends - ;)

vIC c SAID.. DECEMBER 31ST ELECTRIC TRAIN RACES ON THE BASKETBALL FLOOR, 1951. At night I went out the side door ifell down broke my arm.