Kirpatrick's ~ For all our Sporting Needs 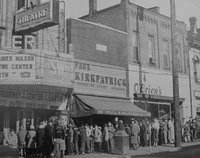 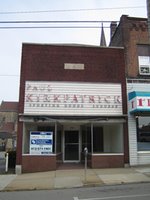 Loved the smell of leather and the Louisville Slugger bats, the quality fishing equipment, the fine baseball hats.
Posted by Charles at 8:41:00 AM

Wow,although i remember Kilpatricks,I remember the Butler theater more.The picture taken is vintage 1959 and it is possible I am in that line.I was quite a movie kid(was 12 in '59) and remember the movie Journey to the center of the earth well.My granddad was employed at the theater for a time as a ticket taker and would let me in for free.

O'briens I also remember,Mrs O'brien was a teacher at St Paul School,I had her in third grade.

Thanks for the memories Charles.I know I comment a lot here but I guess I am a natural BS'r and the photos and comments bring so many warm rememberances of Butler and a happy childhood.

I remember Kirkpatrick, but I had forgotten about the Butler movie theater. The Majestic, Capital, Butler and Penn Theaters come to mind, but I want to say there was one more in town. Anyone recall another?

JACK KIRKPATRICK IS STILL LIVING AND HAS ALZHEIMER'S. HE IS IN A HOME. SOMEWHERE IN HIS 80'S.

Are you thinking of the Bantam Theater?

in the latter years, Kirkpatricks was more like a museum. When I attended the Junior high (1988-1990) I bought my first pair of ice skates there. We would go in the store just to look at all of the archives of sports equipment.

It was all for sale. They had Juice Cruiser tennis shoes endorsed by OJ Simpson from his playing days as well as some 1949 Kangaroo Leather football spikes.

Old man Kirkpatrick took us downstairs once and showed us around. He had an amazing inventory of athletic Americana! As fascinating as it was, it was also kind of sad to see the store and his health failing. It was a very unique place!

Hey Bob Dorcy....would you please just shut up?
It's all me, me, me with you abd your selfish posts.
Just do us all a favor and shut up, loser. Thank you.

My mother tried to teach me this - If you don't have something nice to say about someone, don't say anything. Bob Dorcy, please write more post. I enjoy them. Thanks, Garris Graham

Anonymous sounds like a very sad person. Keep commenting Bob, our memories are pretty much about us.

I remember that when I was a child my aunt would come from Pittsburgh to go to Kirkpatricks and buy Pendelton suits.
Thalia Eberle McGrady

I took my son to Kirkpatricks and bought, from the description someone gave above, a pair of 1949 Kangaroo athletic shoes with rubber spikes. They were very heavy and, I would imagine, kind of hard to run in but to my 7 year old son they were the BEST! That's a memory I'll always have - a 7 year old boy running like the wind (or so he believed) in a pair of shoes that were probably older than his dad! Fabulous!

I ran across some old pix of Kirpatrick's (dont know the date) and it was a jewelry store. You used to go there when you were elegible for a letter sweater and get measured. I still have mine and used to put it in my 56 Ford when I went to a car show.

I lover Kirpatricks. I bought my ice skates there and Pendelton clothes. I would buy Pendelton car blankets and turn them into ponchos.

Mr. Kirpatrick was quite the salesman. My one friend went in one time and didn't even own a baseball mitt, but by the time he left he owned the oil we used to put on our gloves to soften up the leather. He still didn't own a glove.