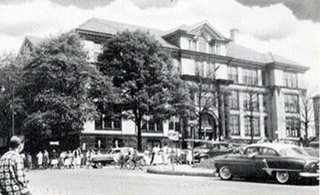 It was a handsome yellow brick school building with a pillared entrance.
Posted by Charles at 5:36:00 AM

After coming from grade school we felt grown up when we went through these doors. I loved those years in Jr. High.

I came to Junior High from McKain street school which has long since disappeared.
Our principal was Bertha Miller. We called her Big Bertha after the World World I cannon. I particularly remember disliking first year Algebra. I disliked second year even more but that was in Senior High. I have warm memories of Junior High school.

I remember sitting in that decrepit old building in the 70's and literally seeing the ceiling fall....what a dump.

I was teaching developmental reading grade 7 in Room 6 the last day the Yellow Brick Building was officially open. It was a sad day. The building needed repaired and the only reason that did not happen was because its foundation was made of wood not steel. I enjoyed that old music room because no one else came into the room and I had it set up so that when the kids came in the door, there were in my realm. The last day the study hall kids wrote goodbye messages on the wonderful slate blackboards. When the building was demolished, the contractors founds an unknown underground foundation. I'm not sure how that situation was fixed for the current extension of the Junior High School.

By the time I was there in the mid-70's it was one of two buildings for junior high. My 7th grade home room was in the Yellow Brick Building, 8th grade in the Red. The third floor was condemned while I was there, and it wasn't too many years later they closed it and tore it down. Somewhere in my dad's house I have a brick from the famous Yellow Brick Building. Looking at the picture I'm guessing it was built in about 1870-1890. Anyone know?

I attended the yellow brick junior high after McKean St., School and I remember Miss Ritzert reciting the LAST BRIGADE in English Class and one of Bertha Miller's favorite chapel hymns was "The Lost Chord" and Corinthians "The greatest of these is Love!" Miss Sechler was the gym teacher. Fine memories. Annabelle

The guy in the bottom left of the picture looks like "Jingles Graham".

Yes that's him. Born and raised at Bradenville, Pa.

I showed his son the picture and comment. He showed Jingles and he said was him. What is your name if you don't mind? I guess Jingles was asking. Jingles son is my neighbor.

In the 1950's the Jr. and Sr. high had open lunch hour. Kids would flock downtown and have lunch at thge Hot Dog Shop, Portman's Dairy,
or pick up donuts at a bakery then roam the streets. Many came back early and stood on the front steps of the yellow brick building and became targets for the many pigeons roosting above. In the winter the school showed old movies in the auditorium.

I attended that building and the red brick building in the early '80's. The third floor was condemned, but it didn't bother me as I had just come from West End Elementary and the 3 third floor was condemned too. I remember the interior steps of the old yeller being so warped that I oftem tripped on them. I'm glad I was a student of a building that is a memorable piece of Butler History that I can share with my kids.
Bev McAnallen, you were my reading teacher and one of the best teachers I ever had. My name is (was)Stacie Gray. You wrote in my yearbook," To a wonderful student whose quiet-confidence will take her far...and you have beautiful blonde hair!" I beamed from your compliment as I had not really received many. I called it shy, you called it quiet confidence. Thank you for that.

By the time I got to the Yellow Brick Building, it was getting pretty decrepid. The third floor was closed down, but made a great place to skip a class or go necking with your main squeeze. Got my @$$ beat in drafting class by a cranky old shop teacher.

The building was built in 1907 on the land that had been the town's graveyard. I think there were about 700 graves and they only identified about 87. The Cunninham brothers who were the founders of Butler were buried there but never identified. I remember there being some marble or limestone plaques inside the main entrance doors. I can't remember what they said though.