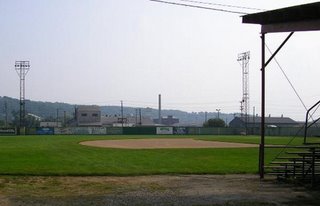 Pullman Park
City officials are hoping to again attract minor-league baseball to Butler. The city wants to spend about $5 million, about half of that from city coffers, to restore Pullman Park.
From 1935 until 1951, the ballpark housed a minor-league team affiliated with the Pittsburgh Pirates, the New York Yankees and several other teams. Mayor Maggie Stock said the city will try to find a marquee team to put in the park. (AP)
Posted by Charles at 12:25:00 PM

Maybe the city should use that money to attract more business to main street....

I remember a very old, by now, Topps baseball card showing Whitey Ford playing his first professional baseball games in Butler and going there with my dad for high school games as well.

Some cities have been successful with this type venture and some not. Altoona seems to have done quite well with the Curve.

On the whole I believe it a sham at best to purport that this will in any way lead to or reflect a Renaissance in Butler. I think you folks Probably could put the money to far better use.

I can remember as a youngster-under 12 years-when we lived on Third Avenue. Our next door neighbors were named Stopp. They rented rooms to the ball players and Hank Sauer had a room opposite my bedroom. We used to exchange comic books between the windows. Hank was one of the few who made the big leagues.
John M. McCall

I use have that Whitey Ford card. My mother thru it out with the rest of my collection or I'd be a millionare today.

I currently live in Hagerstown, MD. Minor league baseball is big here and in neighboring Frederick, MD. It promotes a lot of community spirit.

The Hagerstown Suns I believe? Theres also a team in Frederick, MD.

My father, Ward E. Jones, along with Bill Faust of the Butler Eagle were the Official Scorers for the Butler Yankees and Tigers for several years. Bill would announce the players and dad score the game.Many a game I sat in the Press Box with them to watch a game. When Whitey Ford wasn't pitching he often sat in the Press Box. Who know he would become so famous as a ball player. I no longer have some of the score books but do have a couple of autographed baseball from two of the teams. The picture brought back some good memories of my father and his love for baseball.

When I visited the Baseball Hall of Fame, Cooperstown, NY several years ago, there was an exhibit devoted to the Negro Leagues. A poster there was for a game played between the Homestead Grays and the Pittsburgh Crawfords at Pullman Park in 1930's.

Pullman Park is in the process of renovation. This hallowed ground is being prepared for a rebirth as a more modern facility.
Plans include a new grass outfield and an artificial turf infield. Grandstands, fencing etc are also to be replaced. The plans to start the turf work and demolition are underway now. Tons of topsoil have been trucked in and leveled and seeding is planned for this fall to allow some growth before winter. Here are some pics I took yesterday around noon of the work underway. Legend has it that Whitey Ford, Lou Gehrig and other greats played here when Butler was a part of the Yankee farm system. I remember seeing the softball legend Eddie Fieghner play here and of course Butler High played its football here for many years.
I hope this will be of interest.

i hope that Butler gets a team to play in the historic park,as long as it's not my Hagerstown Suns..did they replace the"swinging bridge" during all this remodeling? i remember riding my bike across that bridge as a kid.. bad,bad area lol

The biggest problem is parking!

If they want a minor league team, why don't they get the Pirates. Haven't had a winner since Barry Bonds played there.