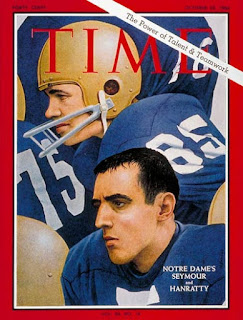 Terry Hanratty — our Butler High School star quarterback. Terry went on to become one of Notre Dame's outstanding quarterbacks, completing 304 of 550 passes for 4,152 yards and 27 touchdowns at Notre Dame. When he left ND in 1968, he held the all-time Irish record for attempts, completions and passing yards. He still holds the Notre Dame record with 63 pass attempts in a single game.Terry's pro football career was spent with the Pittsburgh Steelers from 1969-75 and Tampa Bay in 1976.
You made us proud, Terry.
Posted by Charles at 10:24:00 AM

Yes, Terry did make Butler proud. I remember many Saturday afternoons spent watching the guys play football in the empty lot between First & Oak Sts. Terry, the Saul Twins (who also had distinquished pro-football careers), Tank & his brother and anybody else who showed up. Friends on & off the field.

Does anyone know where Pete Hanratty is?

Terry was great but don't forget Bill, Rich and Ron Saul all of whom were good NFL Players.

Blah Blah Blah...."great" if you say so in high school..mediocre in college, by any standards...complete bust in the NFL, (where it matters).

Terry Hanratty was a heckuva athlete by a great many standards. Anyone chucking it for records @ Notre Dame (in those good old days when ND football was a pack leader)was somebody. Especially in Butler and well beyond. He was a great high jumper too, as I recall.

TH did extraordinarily well for his hometown. Make no mistake.

And I can tell you there were only a few gazillion teenage boys who'd have given about anything to walk in his spikes!

Terry sat behind me in the stadium where we graduated together in 1965. He was also in my sociology class with football coach Art Bernardi as teacher. I don't think Terry even knew I existed. But I felt an odd sense of pride "knowing" him when he joined the Steelers! The scuttlebutt was that Hanratty was the brains behind Terry Bradshaw's on-field successes. The Saul twins also graduated in our class. Those were the years!

I knew both Petey and Terry as we lived next door to his grandparents, Peter and Mary Schlicht. They visited often and we used to play football in an adjoining vacant lot. Terry was about 5 years old and we used to yell, "throw the football, Terry" and he would give it a mighty heave. He finished his pro career with the Tampa Bay Bucs and I heard he had a restaurant in Denver and was doing play-by-play radio for CSU. Peter and his family were living in Germany where he was teaching at a military base. That was years ago so I'd certainly appreciate an update.

I remember listing to Notre Dame games on the radio on Saturday afternoons and was very proud that Terry was a Western Pa guy. I still have a Steeler shirt with the number 5 and the name HANRATTY on the back. I still wear it to every Steeler home game.

To the idiot who said Hanratty was mediocre in college: Hanratty finished third in the Heisman Trophy vote (OJ Simpson won it) his senior year. He also won a national championship and held many passing records at ND for several decades. He also was a first team All American and was profiled very early in his career on the cover of Time Magazine due to his success. Not so mediocre.