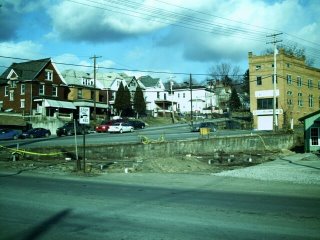 Do you remember this intersection? 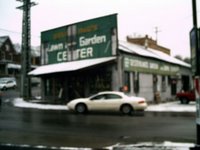 Charles,
Do you have a photo of the old Butler Senior High? I'd like to write a comment about it.
Judy Murphy Harwood
Rancho Palos Verdes, CA

That is the intersection of Jefferson and Monroe Streets. The houses are on the northeast side of Jefferson; the old Monroe hotel would be at the bottom left of the picture. Monroe Street is in the foreground.

I've forgotten what the yellow brick building is..that road to the right of it goes to East Butler.

Course, the lawn and garden center is the Oesterling seed store, just to the southeast of the intersection in the first photo.

There used to be a railroad track on the right hand side of the green building and when we were kids the circus used to come in there and unload, starting a procession up Monroe Street then over Brady and up to the Fair Grounds where the Senior High School is now. I can remember sitting on my Grandfather's porch on Brady Street and watching.

This intersection looks very much the same today with the exception of a new Osterling building this winter. I'm glad you mentioned the circus because I had forgotten that.

THE FORD EDSEL WAS SOLD FROM THE YELLOW BRICK BUILDING IN 1958 & NOW WATER SERVICE COMPANY USES IT.

THE LAWN AND GARDEN SHOP USED TO BE THE HOME OF NATIONAL SUPPLY WHICH SOLD PIPE TO OIL WELL DRILLERS ETC. IT WAS OWNED BY ARMCO STEEL CORPORATION AND LATER MOVED TO ROUTE 8 SOUTH AND THEN TO BRADFORD PA.

Heck yeah I know that intersection . It's the Kittanning St and Jefferson St. intersection. I traveled it every day going to school or to work, Now I travel it at least twice a week going to see my Mom who is in her 80's.

I agree with all of the above memories, my friends and I used to walk this way coming from the athletic field. We would cut up Jefferson and about half way up take a path behind the Coca Cola bottlers. Work our way down a few blocks through the old Silk Mill field and hit the heart of Institute Hill.

Do you remember the silk mill? We lived just a couple of doors away from it. We were always threatened with our lives if we went near there!!

There was an apartment building on Jefferson St. next door to the Monroe Hotel. When I was small we lived on the third floor front and it was great to watch the kids slid their sleds down the hill in the winter when it was too bad for folks to drive, and to watch the circus unload the cars across the street. It was fun watching the elephants, trunk to tail, being led up Jeferson St. to go through town to the Fair Grounds where the senior high school is now. Best seat in the town.

Yeah, I grew up on Institute Hill ... playing behind the old Coca Cola plant in the field and on the little cliff. There were old tombstones there. I also remember Oesterling's store. When I was little, my Aunt Helen would buy me baby chicks there at Easter.

I loved that old Oesterling's store. They still have one of the best seed banks around. My father took pictures as a team of Amish workers efficiently worked the old building into a modernized structure in a single day. Wow - there used to be a circus in Butler? Not that I favor the use of animals is that way, but what a fantastic sight that must have been. I had a similar experience when I lived at the converted train station in Pittsburgh back in the late 80's. So THAT's why they call the road to the high school Fairground Hill. This site is such a wonderful history lesson.

I grew up in the duplex in the picture of Jefferson Street. It was between Linden and Cross street. Shaffer Motors sold Chrisler carsw in 1948 in Yellow Bldg, Also Sea Scouts during WWll, had mettings on second floor.Also Daily Brothers Candy Co was across street from the Monroe Hotel. And Johonny DeRoses barber shop was several doors up from hotel. Who knows the name of the mens club who met down stairs near hotel???? And what was the name of the shoe store on the corner of Jefferson and Elm street?????

I remember eating at the Monroe Hotel restaurant with my dad and then going over to the garden center..and many walks up that dang hill to the playground.

The second floor of that building was where the Sea Scouts (BSA) held their meetings. It was laid out like the main deck of a ship. I remember going there for a rifle meet in the mid 50's

Victor Campbell said: Yes, Phillip, and what Richard said...the cliffs behind the Coca Cola plant we would sit at night in the winter and count the number of deer that would come along on the hood of cars, on Jefferson street. I lived on the last house on Carbon street. (538 Carbon St.)