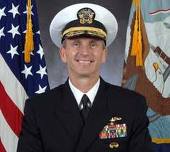 Jonathan Greenert, native of Butler, is now Chief of Naval Operations
as of Sept. 23, 2011.
Commenting on his hometown he said: "You take what you learned from growing up and from high school, and you apply it to real life. I'm very proud of being from Butler".

We salute you, Admiral Greenert.

...and those are just the mates I've heard of. I've only known Jon Greenert, what, 40 years...from the old days when we used to play around St. Paul's. But I'm gettin' old..I can still see Jonny's white frame house, but I can't remember the street any more.

Vice Admiral Jonathan Greenert made and delivered pizza for Frostop during his high school days. His ambition at the beginning of high school was to attend a service academy, and throughout high school, he kept this goal in mind so that he could have a higher education.

Admiral Greenert gave the address at the 2008 All-Academies Ball in Pgh. Everyone who connected with him, proclaimed him an ace of a fellow who's not forgotten his roots.

Hi Butler people
Does anyone have Adrimal Greenert's e-mail
I would like to contact him
Former St. Paul 's student
Mary Anne Herbert-Pribis
fiatmap@zoominternet.net

Hi Charles,
An update if you're interested; Jon Greenert has been confirmed at the next Chief of Naval Operations, the 30th sailor to hold that position, which is the highest uniformed rank in the U.S. Navy. He'll take over in late September.
James Zambroski